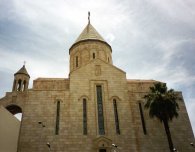 AZAD-HYE (24 September 2004): We received the following correspondence from Sona Torosian, an Iraqi Armenian, who lives in Baghdad and can be reached at the following e-mail address :

“We the Armenians live in relative peace in Baghdad. Nobody harms us. Every Friday most of us visit the St. Garabed Armenian Apostolic Church, which is not far from the Armenian Club.

Our children learn the mother tongue in the . Lately, the Government returned back to us two Armenian schools, which were confiscated in the past. Community leaders are working now to reopen one of these schools as a united school for the whole Community. Armenian teachers with high qualifications will be invited to teach there. The other school belongs to the Catholic Armenians. Armenian Communities in the nearby countries are welcoming us during our visits, such as the recent visit to Antranik Sport Club in by a group of Iraqi Armenians, which lasted 10 days and was a valuable opportunity to meet new people. An Armenian basketball team from soon will head for , to have friendly matches. Some 30 children are hosted these days by Armenians of Amman, Jordan.

The main problem with these movements is the security situation in . Whoever is proved working for the US Army is harmed and even killed in Iraq, whether he is Armenian or not. International reports certainly show how the situation is deteriorating. Instability and the lack of individual security are forcing many Iraqis, including Iraqi Armenians to go away. They are leaving their houses and cars and taking refuge in other countries, until there is improvement in the overall situation. It is completely uncertain what is waiting for us here in . Nobody can guess what kind of surprises await. We have faith in a better future and all we need is to live in a peaceful .

God bless all the Iraqis and all the peoples of the world. Thank you for devoting time to read my message”.

In 20th September 2004 ?Time? Magazine published an article by Christopher Allbritton and Samanth Appleton, under the title ??s Persecuted Christians?. Here are excerpts from this correspondence:

?Between 10,000 and 30,000 of 's 800,000 Christians have fled the country since the fall of Saddam Hussein's regime, according to Christian groups in . Although Christians make up only about 3% of 's 25 million people, the U.N. High Commissioner for Refugees has said they account for about 20% of the refugees fleeing for . They are escaping a climate of violence and a surging Islamic radicalism that have made the practice of their faith a deadly enterprise.

The worst moment came on Aug. 1 when Islamic insurgents – most likely connected with terrorist leader Abu Mousab al-Zarqawi, according to Iraqi government officials – attacked five churches in and with car bombs, killing a dozen people.

The campaign against Christians appears to be becoming more organized. Christians today keep a low profile. While most of the anti-Christian violence has been committed by a small group of Islamic extremists, Christians say they are encountering rising anger among their Muslim neighbors.

Upper-Left Photo: The Armenian Catholic Church in Baghdad, which was one of the five churchs attacked in by extremists on 1st August 2004