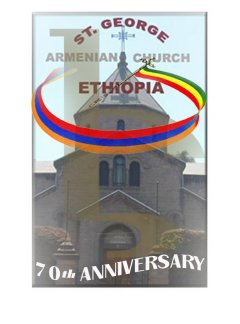 In the 29th April 2005 issue of “Addis Tribune” (a publication of Tambek International, Addis Ababa, Ethiopia, established in 1992) printed an article by Garbis Krajian, under the title: “Genocide 90 years ago ? and Denial”

Garbis Kradjian is a graduate of Harvard's Kennedy School of Government and a teacher of ethics courses. His current assignment is in and .

The article was more than a tribute to the memory of the victims of the Genocide. It was a blend of memories on personal, communal, national and trans-national levels, all intermingled in an interesting way. After all, our life is a reflection of the reality within those four circles.

The article begins with the following statement:

As a form of introduction, I was born in from Armenian parents. My family?s history in goes back over 150 years. From my father?s side, I am fortunate to trace my genealogy back five generations. From my mother?s side, I am only able to go back as far as my grandfather. Nonetheless!

I grew up in the Arat Kilo region and still remember many of my childhood friends. I became fluent in Amharic [the majority language in ] and loved doing everything a child would do in our neighborhood. became my home country and home to almost all Armenians who live in . Right after the fall of the Emperor I left for .

After living abroad for thirty years, I have returned to as an educator. Upon my arrival I learned that the once vibrant and prosperous Armenian community that numbered around 1,500 has dwindled to less than one hundred. The remaining twenty families still run the community school, a club and a church.

On April 24th, like it has been done for the last 90 years, I also went to my church to pray for the soul of my ancestors.

It is estimated that over ten million Armenians and friends in one hundred fifty-two countries gathered in churches, community centers, and national assembly halls to commemorate the 90th anniversary of the Armenian Genocide.

I was one of sixty Armenians who congregated at St. George (Kevork) Armenian Church [in Addis Ababa, capital city of Ethiopia] to pay tribute to my ancestors who were victims of the atrocities committed by the Turkish Ottoman Empire during the First World War.

Needless to say, I could not think of being anywhere else in the world at this particular moment than this sacred place in Addis which is still situated in the same setting where I regularly prayed as a child until I was 19 years of age. This was the same site, where every year, on April 24th, a thousand or so Armenian-Ethiopians gathered to remember their ancestors, the children, and the elderly who were slaughtered by the Ottoman Army. In fact, what makes my conviction so much stronger is that I am the grandchild of one of the Forty Orphans, the ?Arba Lijoch,? who survived the genocide and escaped to . In , these forty orphans were given shelter at the Armenian Monastery later to be adopted by Emperor Haile-Selassie.

The Emperor brought them to , where they made this lovely country their home. These forty young men, who were a band had impressed the Emperor with their musical skills. Upon their arrival to , they were commissioned, under the directorship of Noubar Nalbandian, uncle of Nerses Nalbandian, to compose the National Anthem of Ethiopia. It remained as the anthem, ?Teferi Marsh? or ?Ethiopia Hoy,? until the arrival of the Dergue [military committee formed in 1974 after the overthrow of Emperor Haile Sellasie].

Before I move to the topic of my immediate concern, I pay much gratitude to all Ethiopians, present and past, for giving the Armenians a home for the last 100 years.

Garbis Krajian then gives a summery of the Genocide explaining why should recognize it.

He ends the article by borrowing Reverend Martin Luther King?s ?I have a dream? speech:

I have a dream that one day little Armenian boys and girls will be able to join hands with little Turkish boys and girls as sisters and brothers without having to bring up the past. I hope one day, my daughters Sara and Ani will be able to play with the children of my very good Turkish friend Serdar, without even going there?there ?there, to the past, a very sad past that is inevitable to surface when an Armenian and Turk meet.

You can reach Garbis Krajian at the following e-mail.

On the 16th January 2005, the Armenian Community in witnessed one of its memorable days, the celebration of the 70th anniversary of St. George (Kevork) Armenian Apostolic Church of Addis Ababa, the capital of .

The celebration was presided by Archimandrite V. Rev. Fr. Ashot Mnatzakanyan (Locum Tenens of the Diocese of Armenian Apostolic Church of Egypt and all Africa), Rev. Fr. Myron Sarkissian, Pastor of the Community (and other nearby countries such as ) attended the ceremony. The celebration enjoyed the support of His Holiness Patriarch Abouna Paulos, the Head of the Ethiopian Orthodox Church. This fact in itself was a proof of ages old friendly relationship between the Oriental Orthodox Churches of both countries: and .

Catholicos I helps the Ethiopians of build their first church.

, (10 February 2005)- His Holiness Aram I, Catholicos of Cilicia, has contributed to the church-building efforts of the Ethiopian community of . The community will soon construct its first church in the Ainaar village, located in . The land was registered as a property of the Catholicosate of Cilicia [donated by a Lebanese Christian benefactor].

You can reach Rev. Fr. Myron Sarkissian, Pastor of the Community at the following e-mail.