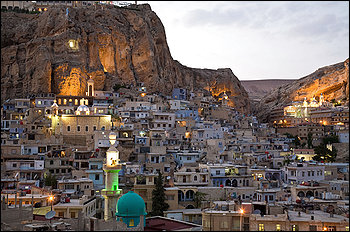 We were standing in the courtyard of St. Sergius, a Greek Catholic monastery in the Syrian hill town of Maaloula, about an hour northeast of Damascus. It was a hot day in late summer, and the strong sun bounced off the light-colored limestone walls. My wife, Cokie, and I sought the shade of a portico as our guide, Hana, explained the history surrounding us.

The original church, he said, dated from the 4th century but was built on top of a pagan sanctuary, and some of the wooden beams, made of Lebanese cedar, were more than 2,000 years old. Also known as Mar Sarkis, the monastery was named for a Roman officer, a secret Christian whose faith was unmasked when he refused to participate in a sacrifice to Zeus. Sergius and his friend Bacchus, a fellow officer and co-religionist, were tortured and executed in the Syrian city of Resafa, and many churches in this country bear their names.

Maaloula is Hana's home village, and on the drive from the capital he had told us proudly that this is one of the few places where Aramaic, the language of Jesus, is still spoken. Now he asked whether we'd like to hear the Lord's Prayer in his mother tongue, and of course we said yes.

Hana held out his arms and intoned the familiar words in a strange language that to me sounded a bit like Hebrew. We savored the moment as the prayer echoed off the ancient stones.

Then a door opened, and in walked about 30 well-dressed people who clearly were not tourists. (No one wears heels that high to clamber around a steep, stony village.)

We followed the party into the monastery church, and Hana recognized one of the women as his wife's school friend. They were there for a baptism, she told him, and as we waited for the ceremony to begin, he gave us a quick tour. A stone altar, dating from the church's earliest days, had no rim or drain spout, a sign that it had never been used for blood sacrifices. The icons on the walls included one of John the Baptist, particularly appropriate given the ceremony we were about to witness.

Then the priest arrived, and we stood quietly to the side as the prayers were said and the baby anointed. Here, for this brief moment, Aramaic was not a dead relic but a living thing, a flower bursting through a crack in the stones, greeting a child into a community of Christians that refuses to be swallowed up by the Muslim world at its doorstep.

Syria is known in the West for its combustible politics: an adversary committed to the destruction of Israel; a supporter of radical Islamic organizations such as Hezbollah in Lebanon; a sanctuary for terrorists operating across the border in Iraq. Many friends who heard that we were vacationing in Syria thought we were daft, but few realized that the country's extensive Christian heritage — St. Paul was converted on the road to Damascus, after all — is still here to be seen and heard and felt.

As a Jew, I never felt unsafe or unwelcome in Syria, but the country's once vibrant Jewish population has been driven away, and the grand synagogue of Aleppo lies decaying and desecrated behind iron gates. Syria has taken a different view of its Christian population, which remains at about 10 percent, 14 centuries after the region's conquest by Arabic-speaking Muslims. The Baath Party, which has ruled since 1963, is decidedly secular. But one of its founders, Michel Aflaq, was Greek Orthodox. Christians have traditionally served in high government posts, and Christian practices and monuments are widely respected. In the bazaars of Aleppo, the names on the gold and jewelry stores are still mainly Armenian, reflecting the influx of Armenians who fled Turkey during World War I. The town has the second-largest Christian population in the Middle East, after Beirut.

Not far from Maaloula sits the Krak des Chevaliers, a mountain fortress built by Crusaders in the 12th and 13th centuries. In the old city of Damascus, a chapel marks the spot where Paul was nursed and taught by a local Christian, St. Ananias, after his vision. Several of the country's bewildering array of Christian sects — from Armenian Orthodox to Syrian Catholic — maintain headquarters in Damascus, and we were surprised to see crosses, outlined in vivid bluish-white neon, shimmering in the evening sky.

As soon as you enter Maaloula, its religious heritage is evident. A large statue of the Virgin Mary dominates one hillside; many houses are painted in a pale blue wash, a gesture of respect to the mother of Jesus. Hana pointed out the mountaintops where every year fires are lighted to celebrate the Festival of the Holy Cross. (Legend says that after Helena, mother of Constantine, the first Christian Roman emperor, found the relics of Jesus's cross in Jerusalem in 325, she ordered her servants to light a series of fires that eventually carried word of her discovery back to the Byzantine capital of Constantinople.)

We went first to St. Sergius, the highest point in town, and though not every traveler gets to see a baptism in Aramaic, there are usually guides or schoolgirls present to recite the Lord's Prayer in the language. These guides report that visitors often burst into tears while they are chanting. Before leaving, we stopped at the souvenir shop, which dispenses local wine, honey and crafts. My wife, who is Catholic, bought a pair of fish-shaped lace antimacassars that now adorn a chair in our bedroom.

We had lunch at a restaurant named for St. Thekla, the patron saint of Maaloula, where we were shown to a pleasant terrace surrounded by leafy trees. There we talked about the town's linguistic heritage. Aramaic actually is not one language but a variety of local dialects, shaped by time and place, and the one spoken in Maaloula is officially Western Neo-Aramaic. Large portions of the Talmud, a compilation of Jewish teachings and commentaries, were written in Aramaic; so were the Dead Sea Scrolls and the Biblical books of Ezra and Daniel. Gradually Greek and then Arabic replaced Aramaic across the Levant, but remote mountain villages such as Maaloula, untouched and unoccupied, were able to retain their traditions. That started changing in the 1920s, when French colonials built a road through the mountains. Bus service to Damascus, radio and television, and the lure of better work in bigger cities drained the pool of Aramaic speakers. It is a common story: The language seemed old-fashioned, even embarrassing, and younger people disdained it.

Then, about 20 years ago, a group of German scholars came to Maaloula to study Aramaic, and villagers started realizing that their precious heritage was worth preserving. In 2000, the iron-fisted ruler of Syria, Hafez al-Assad, was replaced by his son Bashar, a slightly more progressive leader. Under Bashar's patronage, the University of Damascus opened an institute in Maaloula teaching Aramaic, where Hana's two daughters studied last summer. One of the teachers, Imad Rihan, told the Catholic News Service: “Twenty years ago people started giving up on Aramaic. Then 10 years ago, they realized how important it was, so they started teaching it in church. The Germans opened our eyes and showed us we had something special.”

The language got another boost in 2004 when Mel Gibson's movie “The Passion of the Christ” depicted Jesus speaking Aramaic, providing English subtitles. But few villagers could follow the dialogue. A shepherd told a visiting filmmaker from London that the movie language sounded “broken” to his ear. Maaloula's vernacular is “faster and stronger,” he said.

Faster and stronger applies to St. Thekla as well. Born in what's now the Turkish city of Konya at the time of Christ, she was forbidden to hear St. Paul when he came to preach the gospel. Sitting at her open window, she miraculously heard his voice and was instantly converted. After she broke her engagement and vowed to remain a “bride of Christ,” she was sentenced to death by fire. But a sudden storm doused the flames. When she spurned the advances of a nobleman in the city of Antioch, she was thrown into a pit with wild beasts, which refused to attack her. Eventually, Paul blessed her decision to live as an ascetic virgin here in the hills of Maaloula, but she faced one more trial: A local peasant vowed to plunder her virtue. She fled his advances, and the mountain opened before her, offering a narrow path of escape.

That path exists today, and after lunch we followed the footsteps of St. Thekla through the cleft in the rock for perhaps a half-mile. Many caves pocked the cliffs above us, some used for tombs in antiquity, others for dwellings. The walk was a bit treacherous, and I was starting to worry about turning an ankle when we suddenly found ourselves at a monastery dedicated to St. Thekla. The sanctuary is built on the spot where she lived in a cave until her death at age 90.

A series of steps mounts the hill to her tomb, separated by pleasing terraces with bubbling fountains, Syria's all-purpose climate-control system. I did not make it to the top, but Cokie, always eager to recognize uppity women, did. The climb reaches a cool, calming place where pilgrims rest and pray. Many have left tokens of their petitions: holy cards, medals, small gifts of thanks for healed limbs and spirits. I can only imagine what women pray for at the shrine of St. Thekla, but I'm pretty sure it is not the gift of obedience.

That is the spirit of Maaloula. It is not a walled city or a garrison town, but it is fighting a battle today, a culture war to preserve its language, its religion, its history. Perhaps the child we saw baptized was one of St. Thekla's miracles.

Roberts teaches journalism and politics at George Washington University and is the author of the recently published “From Every End of This Earth.”