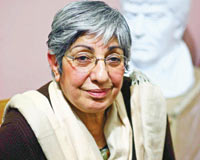 As a girl, Turkish lawyer Fethiye ?etin knew her grandmother as an adored Muslim matriarch by the name of Seher. Then she learned that Seher had been born an Armenian Christian, Haranuş, who, several decades before, had been seized from the clasp of her mother by a World War I Turkish gendarmerie corporal officiating over a column of Armenians being marched out of Anatolia.
?
“My Grandmother,” now out in a translation by novelist Maureen Freely, is ?etin's compelling account of her gradual discovery of the deep contradiction between her proud nationalist education and the realities buried deep in Turkish society. The bare narrative offers few moral and historical judgments, few dates, no maps, no politics. There is also no discussion of whether the disappearance of the Armenians of Anatolia was the result of a genocide or massacres or civil war. Surprises abound: for instance, Seher came to feel great affection for the corporal as a new father. Asked why it all happened by ?etin, all the grandmother can ask back is, “What should I know?”

The fast-selling original of the book is part of a genre in modern Turkish literature that tries to make amends for the gaping hole left by the Armenians in the country's public history. The theme is dominant in both Orhan Pamuk's recent “Snow” and Elif Şafak's “The Bastard of Istanbul.” ?etin's book is already required reading for students in progressive Turkish institutions like Sabancı University in İstanbul. Along with occasional recent exhibitions and conferences about the lost Armenians, these are part of a trend in Turkey that is grappling with a history of denial, nationalism and fears of political consequences.

Altogether eight Armenian girls ended up as new-minted Muslims in the small Turkish town where ?etin's grandmother found herself. Even her brother Horen survived to become known as a shepherd called Ahmet. Initially working as domestic servants, then as free wives and mothers, they kept alive customs like colored candy-bread, which they would share at Easter without letting the children know why; they labored under discrimination enough already. Everyone in town knew they were of Armenian origin. Their official papers registered them as “converts,” but they were mocked in the streets as “converts' sperm” or the “leftovers of the sword.” The family is convinced this was why one talented relative was unable to take up a place in a good military school.

Translator Maureen Freely, in a valuable introduction, reckons there could today be 2 million such descendants of Armenians among Turkey's population of 75 million. More than 30 other ethnicities still survive, and this new proof of the impossibility of repressing its inherent multi-ethnicity helps explain the shrillness and sometimes schizophrenia of Turkey's one-nation ideologues. ?etin argues that all in Anatolia are of “impure blood.”

The pain of the Turkish Armenians is not yet over. As a lawyer, ?etin represents the family of murdered Turkish-Armenian newspaper editor Hrant Dink, cut down in January 2007 by a young man inspired by this same deep-rooted nationalism, and hailing from Trabzon, an eastern Turkish city with a history of ethnic trauma. As ?etin's grandmother warns her children, telling them not to be afraid as they pass by a cemetery, “Evil comes from the living, not the dead.”