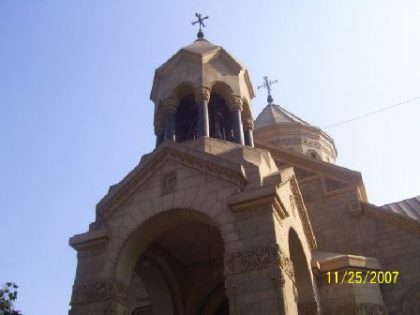 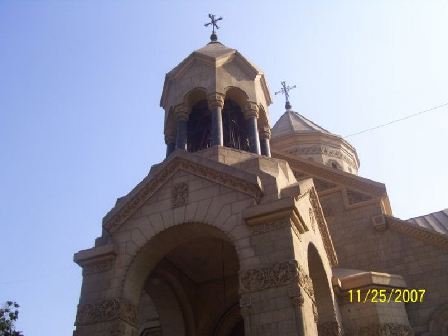 In the recent history, the Armenian migration to started in the beginning of the 19th century. Historians trace the migration of Armenians to to antiquity, with a notable increase under Byzantine rule.

Before the Armenian Genocide: Voluntary Migration

The Armenian presence in dates back during and after the Arab conquest, in which Armenians participated. Wardan (Vartan) El-Roumi (the Roum were the Christians of Anatolia) established a market in Fustat known as the Vartan Market. During the Abbasid era, the courage of the Armenian Amir Ali Ibn Yehia, is praised by the mediaeval Islamic historian Ibn Taghribirdi.

The Fatimid period was a prosperous one for the Armenians, whose community in enjoyed commercial, cultural and religious freedom. Their numbers increased considerably as more migrants arrived from and , fleeing the advance of the Seljuks westward during the second half of the 11th century.

During the Mameluke period thousands of young Armenians, captured during invasions of the Armenian of , which took place between 1266 and 1375, were brought to as slaves. They were employed in agriculture and as craftsmen. The youngest were educated in army camps following the Mameluke system, and later employed in the army and the palace.

At the beginning of the 14th century, a schism occurred in the Armenian Church, which caused Patriarch Sargis of Jerusalem to request and obtain a ?firman? from the Sultan Al-Malik Al-Nasir. This brought the Armenians residing within the Mameluke realm under the jurisdiction of the Armenian Patriarchate of Jerusalem. The schismatic Armenians who came to were given permission to practice their religion freely. Their patriarch's authority over the Armenian community's private and public affairs was decisive. The churches and those who served them were supported by the generosity of the faithful and the revenues deriving from charitable foundations.

The reign of Mohamed Ali (1805 ? 1849) witnessed strong migration streams of Armenians to . Mohamed Ali hired a lot of Armenians to help his government since they were more knowledgeable and better educated than Egyptians at that time. The era of Mohamed Ali witnessed building Armenian churches in ; one for the Armenian Orthodox and another one for the Armenian Catholics. Boghos Youssufian (1768-1844) was an Armenian banker and businessman who in 1819 was in charge of the Diwan Al-Tijara (bureau of commerce) besides overseeing other financial affairs for Mohamed Ali. In 1876 the Armenian Nubar Nubarian (1825-1899) became the first Prime Minister in modern . The total number of Armenians in the 1917 was around 13,000 inhabitants.

After the Armenian Genocide: Forced Migration

The Armenian Genocide which started in 24 April 1915 was a landmark of the Armenian migration to .

The Armenian communities in received a large percentage of the refugees and survivors of the massacres and genocide. They increased the numbers of the Armenians in to reach its peak in 1927 where their total number was around 17,000 inhabitants most of them were concentrated in and .

However, Armenians in managed to cope with their new lives in to the extent that , with its strong Armenian community, was the guiding head of the Armenians in the Arab world until the mid twentieth century.

After the 1952 Nasser?s revolution and the socialist tendency of this revolution, a reverse migration, not to the origin but to the West was observed among Armenian Egyptians starting from 1961 after the introduction of the so called ?Socialist Laws? and the nationalization of many basic economic firms under the regime.

Since Armenian Egyptians at that time were working in the private sector and monopolizing basic professions and trade markets, the socialist laws affected them more than those who work in the governmental sector or in Agriculture. Many migrants felt threatened by these new tendency and left the country and migrated to the West. Since 1961 the total number of Armenian Egyptians is decreasing.

Geography of Armenian population in Egypt

Around 1950, more than 50 percent of Armenians were concentrated in the crowded zones in the heart of the capital nearby their churches, schools, clubs, and markets. The zones of Bein El-Sourain and Darb El-Guenena were considered Armenian zones in the first half of the twentieth century.

In the second half of the twentieth century, Armenians started to move to reside in suburbs such as , Nozha, Maadi, and Helwan. Nowadays, is considered the recent base of Armenians in .

In , Armenian Egyptians work in the private sector, as successful businessmen, skilled handicraftsmen (especially as jewellers and dentists). Since the beginning of the nineteenth century, Armenians came/fled to with a range of skills in the field of business, commerce, and finance. In addition they came to mastering foreign languages. Nowadays,

Armenians who master foreign languages work in offices and branches of international organizations as well as foreign embassies in .

Egyptian-Armenians are very rarely involved in present-day politics, unlike the Armenian minorities in and . The Armenian Church and the apolitical structure of the institutions in the Egyptian Armenian community have a very important role in unifying the Armenians in .

The first Armenian Newspaper published in 1865 in was “Armaveni” Many more followed throughout the years reaching 140 in total, although some of them were short lived.

The first Armenian school in , the , was established in 1828 at Bein Al-Sourein. In 1854, the school was moved to Darb Al-Geneina and the name was changed to Khorenian, after the Armenian historian Movses Khorenatsi. In 1904, the founder of AGBU Boghos Nubar, moved the to Boulaq. In 1907, he founded the and kindergarten. Today, only one building and a playground remain on (downtown ).

The second Armenian school in was founded in 1862 by Boghos Youssefian in .

The newest Armenian school is Nubarian in . This school was founded in 1924 with a donation from Boghos Nubar. The three Armenian schools in eventually integrate a K-12 program. Armenian 6 schools in are partially supported by the Diocese of the Armenian Church in . Armenian education is very important in maintaining Armenian language among the Armenian community in . In Addition, Armenian language is the only language that Armenians use within their families and communities. The three Armenian schools in eventually integrated a secondary education programme; students who have graduated can immediately enter the Egyptian university system, after passing the official Thanawiya 'Amma exams.

There are 6 operating churches in .
The Armenian Patriarchate and St. Gregory The Illuminator Armenian Apostolic Church ().

The Armenian Catholic Patriarchate and The of ().

The Diocese of the Armenian Apostolic Church in Egypt, which is under the jurisdiction of Holy Etchmiadzin, is the primary guardian of community assets such as endowments, real estate in the form of agricultural land and other property bequeathed by generations of philanthropists.