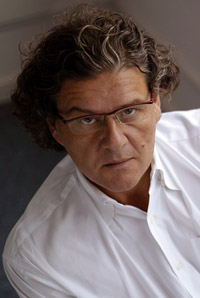 Mossisian is a French architect based in London, UK, born in 1959.

He gained his diploma in architecture at the École nationale supérieure des Beaux-Arts UP N°8 in Paris, where he also engaged in philosophy under Jacques Derrida and Michel Foucault.

His consistent design talent was recognised when he was invited to be a Villa Medicis Hors les Murs fellow at the Cooper Union School of Architecture in New York, where he studied Advanced Design.
While working for Skidmore, Owings, and Merrill in their Chicago and London offices, Michel Mossessian, along with his business partner, Larry Oltmanns, made a successful bid, resulting in the design of the new NATO headquarters in Brussels.

In 2005, Michel Mossessian established the architectural studio of mossessian & partners, where he serves as principal architect.

His first building design in London was the landmark Carmine Building, which is a 15-storey office building at Five Merchant Square.

2010 saw the completion for mossessian & partners of three buildings: 5 Merchant Square in Paddington, London; ExxonMobil Headquarters in Shanghai, China; and a private residence in Sorede, France.

The practice also completed schematic design for 9 buildings and a public square in the prestigious Heart of Doha regeneration project in Qatar, due for completion in 2013 (known as Musheireb development).

In 2011, mossessian & partners have gone on to win two further phases of this masterplan.

The most recent win is an urban renewal project in the Medina of Fes, Morocco, a UNESCO World Heritage site.

Michel Mossessian visited Armenia in 2012 and had a meeting with the Minister of Diaspora Hranush Hakobyan and different projects were discussed. One of the ideas is representing Armenia at different international events such as the Venice Architectural Biennale in 2014.

Source: Wikipedia and other sources with adjustments