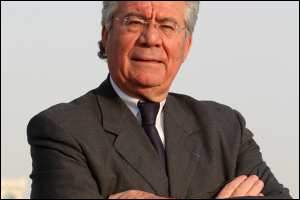 Gurdjian has many races under his belt

Philippe Gurdjian has been both a driver and a race organiser.

ABU DHABI: Philippe Gurdjian comes to Abu Dhabi with one of the most impressive CVs in motorsport.

A Frenchman of Armenian origin, his career in the sport began at the French car construction company Matra, and rose through the group, to work in Formula Three and, eventually, Formula One.

He competed in his first 24-hour Le Mans race in 1975, and has driven in the race seven times, for Ferrari and Porsche.

As well as achieving a best-placed finish of seventh at Le Mans, he competed six times at the 24-hour race in Spa Francorchamps, Belgium.

In the late 1970s, he became general manager of the GEMAP advertising agency, which, after he bought the company, became the biggest communications firm in France by 1985.

In the same year, he organised the French Grand Prix at the Paul Ricard circuit near Marseille, going on to manage another five at the same track before staging seven more at the Magny Cours circuit.

In 1999, he became a consultant on the construction of the Sepang circuit in Kuala Lumpur, and organised three races in the Malaysian capital.

Shortly afterwards, he was named general manager of a company managing the Paul Ricard circuit, which was bought by Bernie Ecclestone, the boss of F1. Combining two of his passions, motorsport and marketing, he took over a four-star hotel at the circuit, a job he has to this day.

In recent years, he was called in to ensure the first Bahrain Grand Prix was completed on schedule - and succeeded, when the race had looked doomed.

He was also appointed as a consultant to the Spanish Grand Prix in Barcelona, and continues to advise the track's managers.