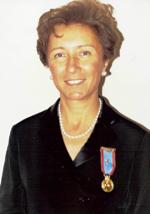 BS in Pharmacy and MS in Biochemistry from the American University of Beirut.

Has migrated to USA and re-stationed in the Arabian Gulf countries, first in Saudi Arabia and later since 1983 in Abu Dhabi (UAE).

Has joined the Armenian One Day School of Abu Dhabi when her two children started to frequent the school. In 1984 she undertakes the Directorship of the School and continues until 2007.

In 1998 she is bestowed by Catholicos Aram I with Mesrob Mashdots medal as a token of appreciation for her services in the educational field.

Besides her activities in the School, Tamar Der Ohannessian has been an elected member of the Legislative Body (Temagan) of the Diocese of Kuwait and the Arabian Gulf Countries from 1994-2002.

She has contributed to the community's Shepor periodical.

She has organized numerous ladies” activities and events and has visited Armenia on many occasions on official and unofficial visits.

She was also on the Abu Dhabi Committee for the Commemoration of the 1700th Anniversary of Armenia embracing Christianity as the state religion.

She has translated several books from Armenian to English:
– The memoirs of he maternal Grandfather.
– The book about famous Armenian commander Tro (Trasdamad Ganayan), written by Simon Vratsian.
– Saint Gregory the Enlightener and the Conversion of Armenia written by Father Bartev Gulumian.
And many articles.

Now she is translating into English a graduation thesis by Father Papken Charian named “The loss of the Armenian Clergy During the Armenian Genocide”.