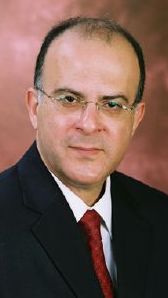 Elected on 06 March 2008 as President of the Cyprus House of Representatives.

He is an alternate member of the delegation of the House to the Euro-Mediterranean Parliamentary Assembly.

He was president of the “Anagennisi” student union in Italy (1981) and of the National Student Union of Cypriots in Perugia (1983) and a member of the Executive Committee of the Pancyprian Student and Young Scientists Federation.

He was also president of the District Committee of the Youth Organisation of DIKO (NEDIK) in Nicosia and secretary of Unionism of the Labour Department of the party.
He was director of the President's Office of the House of Representatives from 1991 to 2001, during the presidency terms of Alexis Galanos and the late Spyros Kyprianou. He was director of the Press Office of the President of the Republic Tassos Papadopoulos and Deputy Government Spokesman from 2003 to 2006.

Since 1988 he is a member of the Central Committee of DIKO and since 1997 a member of the Executive Bureau of the party. On 22 October 2006 he was elected president of DIKO.

He is a member of the National Council, the supreme advisory body to the President of the Republic on the Cyprus problem.

Publications:
He has published a series of articles on the Cyprus problem and the European Union, as well as on various topics of wider public interest in the Cyprus and foreign press. As an international and a political analyst he regularly co-operates with the Cyprus and Greek mass media.

Honorary awards:
The Hellenic Republic has awarded him the “Supreme Commander of Honour” decoration.

Marios Karoyian elected President of the Cyprus House of Representatives