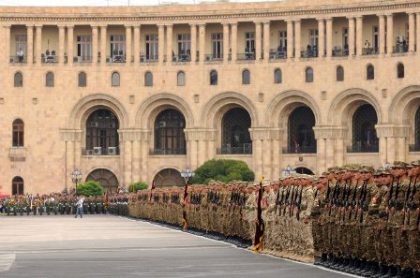 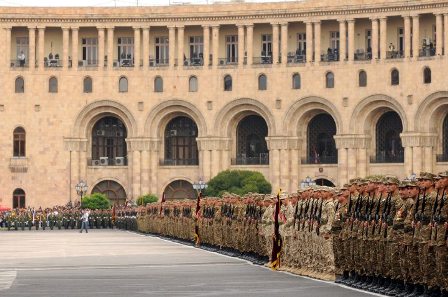 On this glorious day we celebrate the creation of a young Republic that has been trying to make progress in political, economic, and social spheres through numerous projects applied along with a number of international partners. Armenia has chosen its path leading to democratization of the nation and thus has proved its firm geo-political reputation. Armenia has shown its capability to participate in all kinds of international cultural and sport events with numerous achievements.

Armenia continues to maintain good relations with the Nagorno-Karabakh Republic of Artsakh, and a modest outreach to the Armenian Diaspora.

We also remember all the hardships that Armenia had to go through to get to the place on the international political arena. Armenia celebrates its victorious survival through the difficult period with all kinds of stackers threatening its existence. Our history is saddened by the decade long struggle of the Armenian diaspora against the denial of the Armenian Genocide by the Republic of Turkey, the Communist regime from 1920 to 1990, the devastating earthquake of 1988, the Karabakh war and subsequent blockades by the Republic of Turkey and Azerbaijan, and some economic challenges of the last years. During the short 20 years of its new history, Armenia was able to rise again with some very clear mandate to re-shape its future image for generations to come.

On this occasion several statements were made by very important Canadian political figures:

The Prime Minister of Canada, the Right Honourable Stephen Harper, stated among other things that: “Today, you commemorate the historic results of the 1991 Armenian independence referendum. This defining moment not only marked the reestablishment of an independent Armenia, but was itself an overwhelming affirmation of the power of democracy. Following that historic event, the dream of a free Armenian state once again became a reality after more than seventy years of Communist rule. Armenian communities around the world celebrate this achievement and have stood firmly with their homeland as it navigates a sovereign course.”

Liberal Party Leader, the Honourable Bob Rae stated among other things that: “It is with great pleasure that I extend greetings to all Armenian Canadians on the occasion of Armenian Independence Day. On September 21, 1991, Armenia achieved full independence and since that time, Armenians have worked tirelessly at overcoming the challenges of a nascent democracy … On behalf of the Liberal Party of Canada, and our  parliamentary Caucus, I extend our warmest wishes to the Canadian Armenian Community as you celebrate this important occasion.”

Finally, Canada-Armenia Parliamentary friendship group President, Dr. Harold Albrecht, stated: “Mr. Speaker, I rise to pay tribute to Canadians of Armenian descent, on the twentieth anniversary of the independence of the Armenian Republic. I?m honoured to serve as Chair of the Canada Armenia Parliamentary Friendship Group. I?ve enjoyed the opportunity to dialogue with Armenian Canadians, in my riding, here on the Hill, and across Canada. When visiting Armenia, I was fascinated both by how far they have come in twenty short years of freedom, and how young their democratic traditions are. Even the largest cities like Yerevan are a model of peace, cleanliness and safety. Mr. Speaker, all Members of this House are here as the result of a peaceful democratic process, governed by the rule of law. Too often, we take this for granted. Today, I invite all honourable Members to join me in congratulating our Armenian-Canadian friends, and our colleagues serving in the Azgayan Zhoghov, on twenty years of independence, twenty years of democracy, and twenty years of progress. Shnorhavor!! Shenoragalem.”.