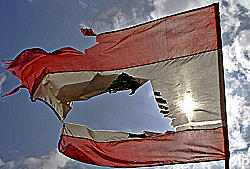 Rev. Paul Haidostian, Ph.D., continues to write his letters from under the title “Armenian letter from “

Twenty-six days of our lives have gone by, spiritually challenging, but mostly wasted and distressing. All life remains suspended and threatened until further notice, including academic life at .  While our intention to complete the summer session is still there, many students have been asking about the fate of the Fall semester.  Our answer is always one of hope.  We have suffered many “hot” summers since 1975 and have survived, and we believe we will resume normal activity in due time.

The good news of these days comes to us on the billboards of .

One local bank lists six different times when was destroyed in the past 30 years and says, “Those of us who have built before, will build again!”  Another bank announcement says, “Surely the clouds will give way to sunshine!”

War humor is also on the rise.  “The Shiites of Lebanon are certainly the most educated community,” one joke says, “because they spend maximum time in schools,” referring to the fact that the majority of the population of Southern Lebanon and now displaced and taken refuge in schools, are Shiites.

Unfortunately, the military race in Lebanon is still on: between a “mighty” army that has secured the justification of its atrocious acts and state terrorism before it even commits them, and a militia that has entered a “holy” war, the beginning of which has caused further divisions in Lebanon, and the end of which can lead to more terror and conflicts.

Politically speaking, the vast majority of the followers of the developments have reason to be pessimistic.  The powers that control international politics are not honest brokers and therefore do not have justice and peace as their aim, and the totalitarian regimes of the region are not even capable to function in a culture where justice and peace are valued.  is once more a captivating arena in the clash of interests and agenda of those powers.

And I pity the Lebanese politicians, a majority of whom are still and only interested in strengthening their position vis-?-vis their local opponents.  Television and Radio talk-shows fill the air. A few dozen individuals keep appearing on all channels to interpret and reinterpret the events in ways that exactly fit their limited ideology. There are those who speak about the current war in as if it is unrelated to the context of the larger Middle Eastern crisis and the Palestinian cause, and others who speak as if the welfare and future of are not at stake and the only worthwhile issue is the Arab-Israeli crisis.  You have those who paint the picture of the resistance of Hizbullah in divine patterns, and then you have those, unfortunately including some Lebanese, who continue to be impressed by the Israeli appetite and power to crush its enemies without mercy.

Soon, the pages of four weeks of this infamous war on will be completed and this is my fourth letter to you all.  Almost one-thousand civilians have been killed.  Many more thousands have been injured. A few thousand apartment buildings have been totally ruined, one of which housed Mr. Moukalled and his family, a professor of Computer Science and at our university. The targets in have been mostly civilian targets. Some may be close to military targets, but only close to. Others are miles away from any military post in .  We are promised to witness more destruction, more killing, and rounds of disaster after disaster.

has often been the envy of its neighbors. has always wanted to be proud of its wealth of civilization, intercultural identity, institutions, beauty and energy to create. And yet, look at the symbols has chosen to destroy before everything else: the airport, seaports, bridges, communication stations, and the like, the exact symbols of Lebanese openness to the world.

We have been used to be envied, as you all know, not pitied.  But there are still reasons to envy .

In the face of the crisis, I am impressed by the solidarity of the Lebanese with each other even if they continue to politically disagree.  As a friend pointed to me more than one-fourth of the population has been displaced, and yet crime, violence, and social unrest remain at a minimum.

I am impressed by the sacrificial work done by the volunteers and the aid workers, some of whom arrived in after most foreigners had been evacuated from !  Dozens of thousands have evacuated, but hundreds of foreigners have benevolently filled the humanitarian vacuum.

I am impressed by the hope and faith of the Lebanese population.  I noted after our church service in the in Ashrafieh yesterday that the worse the situation gets in the country the louder our hymns of praise, repentance, supplication, and dedication sound.

I am impressed by the perseverance of the people of , including the Armenians.  I see sadness, fear, uncertainty, and disappointment in the faces of the people around me every day.  But I am yet to here people complain. A staff member at spent three and a half hours today trying to secure petrol for the van that transports our staff.  The professor whose house was totally destroyed said he could only thank God for safety.  These attitudes will help build the country again.

I am impressed by the multitude of individuals and organizations in the world that have shown special love for and have tried to help in some way, have written, prayed, marched, and pledged support.

These will help build both the morale as well as the bridges.

But I am also disappointed!

I am disappointed in the Lebanese official political structure. We do not have still, a crisis management center or structure in the country.  There are dedicated individuals, Prime Minister F. Saniora, and Minister of Health M. Khalife, just to name two.  But neither relief efforts, nor information dissemination have been organized or centralized by the government.

I am disappointed in parts of the Middle Eastern populations, Islamic parties and leaders, who capitalize on the pain and suffering of their people, neglect the human in the other, and glorify violence and hatred of the “other”, sometimes known as the “Westerner”, the “Christian” or the “infidel.”

I am disappointed in the huge gap I notice between the goodness and benevolence of the average American citizens I have tasted, and the policies of their government that often reflect a careless reading of the real needs of “weaker” nations, and a patronizing management of the situations of the world.  Much material, natural, cultural, organizational, educational, and developmental wealth has been given to the therefore much will be expected.

I am disappointed in those countries, churches, and individuals, who claim to have the gospel of Jesus Christ as the norm of their life and yet fail to ask the critical questions of justice, mercy and peace in this world.  Christians cannot conform to this world, or to the dominant powers of this world.  The peace of Christ cannot be spread by the bloodshed of humans victims of wars no matter what the reasons for those wars, and the cannot be built on policies that lead to violence, retaliation, and hatred.

Despite all the disappointment, we do not lose heart. There is work to be done both during and after the crisis.

The Christian population of the Middle East is called to play a unique role in these times: to read the Gospel of reconciliation in ways that are not hijacked by the political cultures of a “Christian” West, and to be living witnesses of the love of Christ to non-Christians in the Middle East who sometimes make it difficult to pour that love into their midst.  And the need is to do and be both in ways that are critical of the status quo both in the East and the West.

Till we communicate again, let us all remember that what binds us all is neither defined by political agreement, nor common ideology, nor convenience, but by our humbleness and love as undeserving children of God's grace.