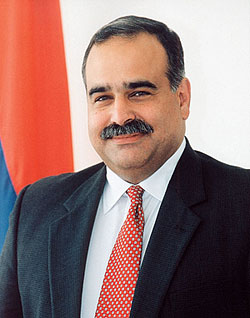 Addressing a congress of his Zharangutiun (Heritage) opposition party on 1 August 2006, Raffi Hovannisian lamented widespread popular apathy toward politics, saying that Armenians must engage in civic activism more energetically if they want prosperity and rule of law. He expressed concern in particular at the prospect of massive vote buying by pro-government forces and candidates in next year's parliamentary elections, in which Zharangutiun is expected to be a major opposition contender.

“It has to be understood that he who sells his and his children's future will not have a place in the company of those who are building a homeland of vote bribes,” Hovannisian said, referring to a practice that was commonplace in the last local and national elections. “The public itself must realize that it must actively participate in all processes.”

The congress was the first such gathering since the start of Zharangutiun's bitter confrontation with the Armenian authorities that was sparked by Hovannisian's stinging attacks on President Robert Kocharian late last year. The party's leadership was evicted from its headquarters last March and has still not been able to reclaim the state-owned property despite a court verdict that effectively declared the eviction illegal.

The congress, attended by over 200 party activists, took place in the small conference hall of the Armenian Writers Union.

Zharangutiun leaders said they planned to gather 600 delegates but could not lease a larger hall due to an unofficial government ban. It followed the launch late last month by Hovannisian and another prominent opposition leader, former Prime Minister and National Democratic Union Chairman Vazgen Manukian, of a broad-based “apolitical” movement tasked with trying to boost the civic consciousness of 's population. They say this is much more important for the democratization of 's political system than government assurances that the next Armenian elections will be free and fair.

“In my opinion, a civic mobilization, a reassessment of civic activism is imperative,” Hovannisian told RFE/RL. “Citizens of the must finally realize that the fate of our country hinges on their votes, their participation, their activism. A whole people are outside the opposition and government camps, indifferent, not affiliated with any party, stripped of rights. We should bring that overwhelming majority into play,” the U.S.-born politician said. “Civil society representatives and politicians committed to democracy have a big role to play in getting this message across,” he added.

The “RFE/RL Caucasus Report” is prepared by Liz Fuller based on news and analyses from “RFE/RL Newsline” and RFE/RL's Armenian-, Azerbaijani-, Georgian- and Russian-language broadcasts. It is distributed every Thursday.

Direct comments to Liz Fuller in at [email protected]

For information on reprints, see: http://www.rferl.org/about/content/request.asp

Back issues are online at:

Send an e-mail to [email protected]