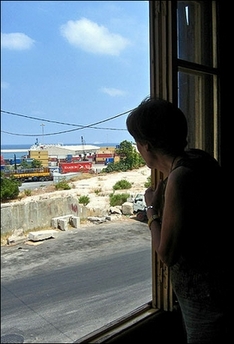 From the evacuation of Yasser Arafat in 1982 to the current foreign exodus, Makrouhie Yerganian has seen the troubled history of unscroll in front of her eyes at her vantage point in front of port.

Just last week, two truck drivers having coffee were killed when their parked and apparently empty vehicles were blown apart in an Israeli air strike on the edge of the port, just 50 metres (yards) away from her modest home in a three-storey apartment block.

“It was a very strange noise that rattled our nerves. We thought we had heard all sorts of explosions but this was something new even for us,” says the Lebanese Armenian schoolteacher who has lived in the Mar Mikhael area for more than half a century.

Her 85-year-old mother was just about to water the flowers on the window ledge, until Yerganian changed her mind. Many of the windows in her building were shattered, but the women escaped unharmed from 's latest salvo in its war on Hezbollah.

“I believe it is written on your forehead. If it is written, you can die wherever you are. But that day, the Lord protected us,” says the 60-year-old woman from her sitting room where sheets cover the furniture, as the shutters slam from the sea breeze.

A vivid memory still stencilled into her head came in 1976 when militiamen massacred Shiites, Druze and Palestinian refugees in the nearby Karantina camp, now closed.

“A boy whose voice had not even broken kept pleading: 'Don't kill me'. They dragged him off to the corner of the street and shot him,” she says. “I can still hear his voice in my head, begging for his life, as they dragged him off.”

Two years later, in another of the multiple wars within a war which devastated between 1975 and 1990, the Phalange, a Christian militia, battled Syrian forces.

“The Syrians were parked right in front of our windows, and the Phalange behind. They started fighting and we were caught bang in the middle,” she says.

During the brief deployment of the Multinational Forces sent to oversee the Palestinian evacuation after 's invasion and supposedly to protect the refugees, they had new neighbours in the shape of American, French and Italian troops.

“They were all clean, except the Israelis. The Americans and the others used metal shacks and they would burn their waste,” she says.

“We would be hanging the washing and they (Israeli troops) would be doing their dirty business or relieving themselves in full public view. We had to move away for a while,” says a grimacing Yerganian.

“The Italians were friendly and we even learnt a few words of Italian. The Americans and the French would hand out chocolates to the neighbourhood kids,” she says. “People would come from far to see them from our house. We had a lot of guests in those days.”

But things went sour yet again. President-elect Bashir Gemayel was assassinated and “the radios tried to reassure the people by saying he had survived the bomb blast”, Makrouhie recalls.

“At midnight, we heard the marching of boots. We looked out of the window and saw the Jewish soldiers heading toward west “, on the eve of the massacres in the Palestinian refugee camps of Sabra and Shatila by Phalangist militiamen.

Before the massacres, French soldiers had been posted with huge guns on the rooftops, including Yerganian's, to protect the evacuation of late Palestinian leader Arafat and his PLO fighters in 1982.

In 1984, west fell to Muslim militias and the and European troops withdrew through the port after their barracks were blown up by suicide bombers at a cost of some 300 lives.

The Lebanese army posted heavy artillery outside the house to bombard the mostly Muslim western sector, opening up with 55-mm rounds that rocked the building to its very foundations.

“I was going mad, with pillows on each ear to muffle the horrific noise. I was going to go out and tell them to stop, please, please. My mother told me: 'Don't worry, this will pass too',” says Yerganian.

Despite everything, “I love . I was born here and this is my country. Anything that happens to our poor , it breaks our heart.

“We were so happy seeing the new bridges and the revival of the downtown thanks to Hariri after the civil war, but they won't allow us to have any joy,” she says, referring to the 2005 murder of former premier and architect of 's revival, Rafiq Hariri.

While the tens of thousands of foreigners were fleeing the Israeli air strikes across from her window, “at least we had hopes for a little calm in our area. But after the last evacuations (on Wednesday), we fear the worst for ,” she says.

Lebanese Armenian schoolteacher looks at the from the window of her house. From the evacuation of Yasser Arafat in 1982 to the current foreign exodus, Makrouhie Yerganian has seen the troubled history of unscroll in front of her eyes at her vantage point in front of the port.(AFP/Haro Chakmakjian)