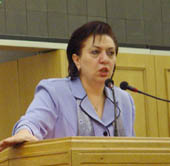 On 4 July 2008 the Noravank Foundation?s experts hosted the Armenia's Foreign Ministry head of the Committee for Diaspora Hranush Hakobyan.


The subjects discussed at the meeting concerned the urgent issues of organizing the Armenians all over the world.

Beginning from 1 October 2008, the above mentioned Committee will be re-established into a Ministry for Diaspora affairs.

Director of Noravank Foundation, Gagik Harutyunyan, mentioned that it has already been a year that the Armenological Coordinating and Information Center is engaged in organizing Armenological researches, establishing ties with Armenological centers, organizing and realizing researches in Armenian communities. He highlighted the significance of forming a pan Armenian information network using all modern communications advantages.

The head of the Armenological Coordination and Information Center, Harutyun Marutyan (PhD) gave a brief account about issues concerning the Armenian collective memory, especially in relation with the Genocide. Another issue of importance concerns studying the experience of other countries in working with their Diaspora and the efforts they have made in organizing repatriation. This experience has come to show that the ideology of repatriation means not only realization of certain steps (namely the return of the Diaspora to the native land), but, first of all, to establish close ties with the Diaspora communities, on the level of groups, families and even individuals.

Tamara Vardanyan (PhD) mentioned that constant relations have been established with a number of Armenian communities in CIS countries and with individuals engaged in preserving the Armenian identity. Much attention is devoted to the problems of the Armenian community in Tbilisi, where active work is carried out with the local Armenian non-governmental organizations, to introduce mechanisms of preserving the Armenian language and culture. Vardanyan noted that the process of assimilation in post-Soviet countries is quicker than in other parts of the world, for example, in the Middle East.

The problem of teaching the Armenian language was also on the agenda. It was mentioned that in the communities of the post-Soviet Diaspora, Armenian children are usually foreign language speakers (especially Russian), therefore, it is necessary to raise the interest of these communities towards the native language and create additional stimulus for teaching, for example, through organizing Armenian language and literature Olympiads or competitions, distance study courses, etc., in one word, by doing anything possible to stimulate the Armenian youth and keep them close to their roots.?

The participants of the meeting were unanimous that to solve the above mentioned problems it was necessary to consolidate the active and healthy powers of Armenia, Nagorno Karabakh, Javakhk and Diaspora.

The head of Noravank Foundation?s Armenological Center, Ruben Melkonyan (PhD) mentioned that the problem of Islamized Armenians of Turkey was very multi-level. At present, certain processes occur among Armenians which were forcefully Islamized, for example re-adopting Christianity. Some attempts are made to protect historical-cultural monuments, and interest has appeared towards the native language etc. It was especially mentioned that Noravank Foundation had organized field researches to the Eastern provinces of Turkey, within the framework of studying the hidden Armenians. One of the most important aspects of this encounter is the perception of the hidden (also called apostate or crypto) Armenians by other groups of Armenians. As an example, the not-so-warm relations are mentioned between the Islamized Armenians who are living in Germany and the local Armenian community there. Melkonyan underlined the importance of recognizing the fact that as a result of?various historical reasons, some groups of Armenians are differed from us by their religion, culture and way of life. The existence of this stratum is a fact which must be taken into consideration and it is necessary to work out ways and methods to re-establish the relation with them.

In his speech Hranush Hakobyan mentioned that up-to-date information technologies had made a good ground to pursue the above mentioned issues. She singled out four basic directions one should adhere to while carrying out the work: organizational, ideological, financial and legal. Diaspora?s attention should be concentrated on Armenia, she said adding that the native land must be a magnet attracting the Diaspora Armenians.

At the end of the meeting Director Gagik Harutyuntan said that the Foundation would continue scientific research and field work in the above mentioned directions and will cooperate with the new ministry.

Noravank Foundation was established in 2001 with an aim to conduct strategic researches and at present is one of the most important Armenian based “think tank” institutions.

Special attention is paid to the researches of informational security. From the practical standpoint the Foundation studies the problems connected with the Armenian communities The experts of Noravank Foundation analyze geopolitical processes and advance theories in the context of political, informational, communicational and energetic security, which make a basis for well-grounded forecasts on regional development processes.

The Foundation also carries out an educational program with an aim to inform young researchers about up-to-date ideas in social and political sciences.

Noravank publishes three-language issue of “21st Century” and “Noravank Foundation Bulletin”. More than 100 publications and special issues have been published up till now.

You can get better acquainted with the activities carried out by Noravank Foundation through its website (www.noravank.am).