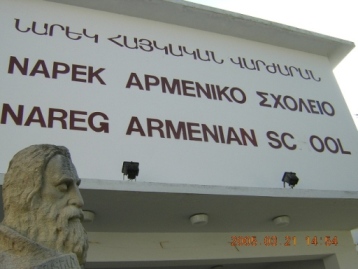 On Wednesday, 18 June 2008, at Nicosia Nareg Varjaran's outdoor amphitheatre, Gibrahayer's nor serount had its day: the graduation ceremony for the school year 2007-2008.

This year's graduation was different than previous held by the school, for two main reasons: Nicosia's Nareg Varjaran celebrated its 35th anniversary at its present location and, for the first time, Nareg Gymnasium had its first graduates!

The ceremony started at 18:30 with the entrance of Nareg's Headmaster, Mr Arto Aivazian, followed by the 25 graduates, 20 girls and 5 boys. Ara Kevorkian's musical synthesis Garod (nostalgia for the home country) accompanied their entrance. After the graduates were seated, the school choir sang the National Anthems of Cyprus and Armenia, as well as the School Anthem. The opening speeches were delivered by Mrs Yeran Kouyoumdjian, Secretary of the School Committee, and by Headmaster Aivazian.

For the first time since the school's opening in 1972, the Headmaster's speech included a page in Greek, for the benefit of the Inspector and Greek Cypriot Nareg Staff.

After the two concise speeches, two poems were recited by the graduate students: one for the school's graduates, and one for the Armenian people. Then, the graduation diplomas were presented to the 20 Elementary School graduates (17 from Nicosia, 1 from Larnaca and 2 from Limassol) and to the first 5 Gymnasium graduates by the Armenian MP at the House of Representatives, Mr Vartkes Mahdessian, with the blessings of Archbishop Varoujan Hergelian, followed by the delivery of two awards by the Chairman of the School Committee, Mr Krikor Haroutunian, one for athletic pe rformance to Elena Kaprielian, and one for model student to Marita Aredjian.

The awards were given in the loving memory of the late Toutoundjian family, killed on-board the Helios Airways' tragic flight 522 to Athens on 14 August 2005; both Ara (aged 16) and Baret (aged 12) were students at Nareg Varjaran, killed along with their mother, Hilda, and their father, Hagop who was a member of the School Committee at the time of his death. May they always rest in peace…

Later on, Christina Argyridou greeted us in Armenian on behalf of the Elementary School graduates, and Maneh Tunjikian greeted us with a moving Greek speech on behalf of the Gymnasium graduates. After the two speeches, retiring teacher, Sarah Vorsganian, delivered an encouraging speech addressed to the graduates.

After these speeches, the school's dance troupe performed a folkloric Armenian dance (choreographer A. Mkhitarian), dre ssed in traditional Armenian costumes, cheering the spectators with their rhythm, co-ordination and liveliness, and then the school choir (under music teacher Sarkis Demirdjian) kicked in, singing a melodious Armenian song; right after that, Nareg graduates joined the choir in singing the traditional farewell song (Hrajeshdi Yerk). The graduation ceremony finished at around 19:40 with a prayer by Archbishop Varoujan Hergelian, der Momik Habeshian and der Mashdotz Ashkarian.

After the community's prominent figures and the proud parents and other family members congratulated the 25 bright graduates, indeed the future of the great Gibrosi Armenian community, everyone went to a nice cocktail inside the school. For about an hour and a half, social conversation and gossip came and went between those who enjoyed the variety of drinks and food available. The catering was excellent!

Towards the end of the cocktail, the scho olchildren spontaneously started dancing the “Miasnoutian Shourchbar” on the upper floor of Nareg Varjaran, accompanied by confetti and presenting us with a lovely sight and sound, under the yellowish full moon and the slightly breezy night.

Occasions like this remind us that the future of all communities, especially of a small one like the Gibrahayer, lies in the hands, minds and spirits of a well-educated nor serount, and that these youngsters will soon become the future leaders of the community. We were also reminded of the importance of a solid and comprehensive education, which ensures that the students are equipped with an invaluable asset to deal with the adversities of tomorrow's competitive society.

I think that the school administration and, particularly Headmaster Aivazian, deserve a bravo for the excellently organised graduation ceremony.