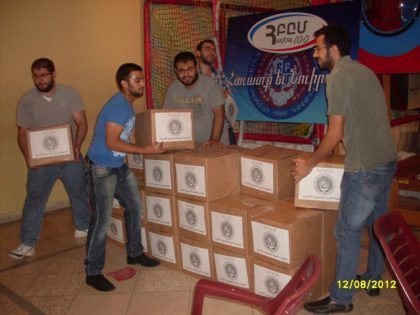 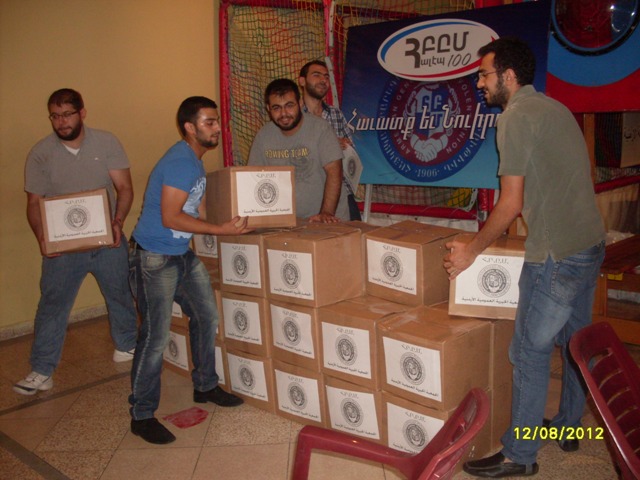 Since the day it was founded, for over a century now, the AGBU* has proved to be the benevolent union that alleviated the problems of Armenians across the globe, by supporting them both morally and financially.

Today too, amidst these hard times that Syrian-Armenians are facing, the AGBU Regional Committee of Syria has followed the situation up closely and held an emergency session, where it decided to aid the Syrian-Armenian families in the largest amount possible.

After consultations between the committee chairman and the Middle East representative, the AGBU Central Board made the historic decision to organize a fundraising and aid the Armenian families in Syria.

The emergency body's mission in Aleppo included the distribution of foodstuff, which was carried out in three stages (in August, October, December 2012 and January 2013). The packages included enough necessary food for a family of four. Because of the cold winter and the lack of fuel, the third package also included wool blankets, socks, scarves etc.  2705 families benefited from each aid distribution.

The AGBU?AYA youth helped deliver the packages to the recipients' houses with the school buses. Similar actions were also carried out in Damascus and Qamishli.

The aid packages in Damascus included necessary food for a family of five, in addition to some basic medicine and a first aid kit. The number of the recipient families was 250.

The first aid kits were prepared by the first aid executive body in Damascus, who also delivered the kits to the needy families.  The distribution was accomplished in October and November 2012.

550 families received food packages in Qamishli. The aid was also extended to the Armenians in adjacent regions (Hasaka, Malikiyah, Ras al-Ayn). The distributions were carried out from September to December 2012.

Besides the food stuff, financial aid was also allocated to help pay for the treatment of 20 injured Armenians – so far-, who fell victims of snipers and explosions. The union also covered the funeral expenses of some of the deceased.

Winter clothing was provided to children from 6-12 years old and a sum was dedicated to the National Orphanage Fund to provide food for the children.

In an attempt to express their gratitude to the Arab compatriots, AGBU treated 300 homeless Syrian Arabs to a hot meal, which was much appreciated by all.

Shelters were prepared in all of Aleppo, Damascus and Qamishli, equipped with the necessary items.

The Union school and club were provided with necessary equipments (blanket, bed, heating, water reservoir ect.) to be used if necessary. A room was also prepared to serve as a clinic.

Besides the above mentioned humanitarian benevolent works, AGBU has also cooperated with the Syrian Armenian Relief Fund, its executive bodies and their subordinate bodies, in Aleppo, Damascus, Qamishli, Latakia and Kesab, by helping the Armenians financially, morally and physically (the aid included food distribution, health care, reconstruction of damaged houses, paying for the treatments of the injured).

A report of all the work that has been done with the financial aid will be prepared by an independent auditing company, which will be presented to the AGBU Central Administrative Committee and all the benefactors.

The AGBU Regional Committee of Syria announced that the L.N.K.G. School in Aleppo and the G. Gulbenkian School in Damascus managed to open their doors to students for 2012-2013 with great financial sacrifices, so that the needy Armenian children won't be deprived of education. Because of the current catastrophic situation, the number of students has doubled, thus creating a huge financial gap, which will be taken care of by the union.

The AGBU Regional Committee of Syria highly appreciates the central administrative committee, the Middle East representative, the benefactors and our members abroad for all of their help during these difficult times.

It also thanks all the members of the administrative bodies and the emergency body and the youth for their selfless and devoted efforts in Aleppo, Damascus, Qamishli, Latakia and Kesab.

The committee points out that further support is needed even if the situation becomes better. AGBU wishes that all the benefactors continue to stretch out a helping hand. “AGBU's humanitarian aid will continue in Syria as long as the Armenian community needs our assistance and support,” says the report.

See the report in Armenian here: