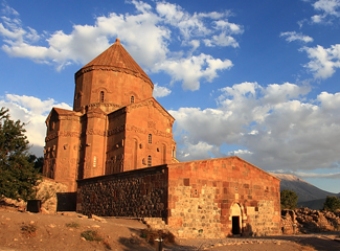 Following the Armenian Genocide (1915-1923), thousands of Armenian churches and historical monuments were destroyed in Western Armenia (now part of Turkey). Many churches were converted into mosques. This century long policy is well known in the Armenian history as “cultural genocide”, a parallel to the physical genocide. Hundreds of historical locations were renamed with Turkish names; in order to conceal their real identities. Even species of animals and plants were deprived from their Latin scientific names that carried a kind of relationship with “Armenia” and were replaced with new names.

As the Turkish society embarked into new era of changes, the authorities in Turkey tried to promote a “zero problem” policy with the neighbours. The last in these series of reconciliations was the Armenian nation. Since the historical injustice befallen on this nation was the worst, reconciliation measures faced big problems, mostly related to the Turkish taboo of the Armenian Genocide and the psychology of dealing with former second category citizens. Prime Minister Erdogan went as far as to conclude that “it's not possible for a Muslim to commit genocide” and since Turks are Muslims then there is no genocide!

The new game is to show how tolerant is Turkey towards the Armenians and other nations. This is staged now in Akhtamar island in Lake Van, in the vicinity of a place that used to be the heart of Western Armenia and where until the early years of the 20th century hundreds of thousands Armenians lived. Akhtamar was the base of a Catholicosate (church center) that lasted for more than 8 centuries.

Turkey now expects the descendants of these Armenians to come and attend a holy mass permitted exceptionally to take place there on a particular date (19 September 2010). There would be no cross, no whatsoever Armenian signs or symbols. Instead, the worshipers would be greeted with a big Turkish flag and possibly a huge portrait of Ataturk. The church has been neglected for decades (it survived total destruction due to the fact that it is located on an abandoned island). It was renovated in 2007 and opened as a museum and continues to be a museum.

How rightful is to make a holy mass in a church that has been confiscated and turned into a museum? How correct is to perform a divine liturgy in an altar that would be desecrated after only few hours of the departure of the worshippers? These are issues that need to be considered by the Armenians who plan to attend this event.

It is an act of loyalty and national quest to visit Armenian historical places and show that they are not left alone to their cruel destiny. We believe, however, that this kind of visits should not be part of an event organized and orchestrated by the Turkish authorities, serving dully the political agenda. We prefer Armenian pilgrims visiting places where other Armenians live, such as Beirut, Aleppo, Der Zor, Isfahan, Kolkata, Venice, Jerusalem, etc., where they would be able to partake in Armenian rituals and communicate with the devoted people who are preserving these places, without being humiliated or exploited in propaganda games.

Note: An example of such pilgrimages is what Lucine Kasbarian describes in her Der Zor diary here.