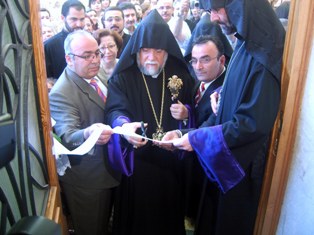 ANTELIAS, Lebanon – His Holiness Aram I inaugurated the newly built ?Chemperdjian Library? in Aleppo on May 22. The library was built recently on the initiative of the Armenian Prelacy of Aleppo and next to its building. The philanthropists who funded the project attended the inauguration in addition to the Armenian attach? to Aleppo, Arthur Mangassarian, representatives from the Diocese and a large public.

Following a brief cultural entertainment program, Primate Bishop Shahan Sarkissian stressed the importance of the new library and expressed gratitude to the Chemberdjian brothers who readily funded the initiative by donating 40,000 dollars.

His Holiness delivered his blessings, praising this beautiful phenomenon in the life of the Armenian community of Aleppo. He also commended the work carried out by the several other libraries in Aleppo. On this occasion the Pontiff highlighted the essential role of Armenian books in Armenian cultural life and pointed out that it is not enough to only publish Armenian books; it is also important to read them to get in touch with our intellectual-spiritual values. The Catholicos also praised the donors, who have on several occasions supported the initiatives of the Prelacy in Syria out of a commitment to national life.

During his visit to Syria, the Pontiff also visited the library established by the director of the Armenian Affairs Department of the Gulbenkian Foundation, Dr. Zaven Yegavian, praising this important cultural achievement.

GABRIEL CHEMBERDJIAN TO BE AWARDED THE ?CILICIAN PRINCE? MEDAL

ANTELIAS, Lebanon – His Holiness Aram I will award the ?Cilician Prince? medal to Mr. And Mrs. Gabriel Chemberdjian from the Armenian community of Aleppo during a special event in the hall of the Veharan after the holy Mass next Sunday.

Upon the request of His Holiness, Mr. Chembedrjian has made several important donations during the last few years towards the development of educational, cultural and humanitarian fields in Lebanon, Syria and Armenia. He has dedicated half a million dollars for the renovation of the Veharan in Antelias and its adjacent parts.

Mr. Chemberdjian has recently embarked on a personal initiative, with the blessings of the Pontiff, to build a hospital for the local population of Der-Zor as an expression of gratitude for the love and support shown by the Arab people to the survivors of the Armenian Genocide.

Photos: Catholicos celebrates the opening of Chemberdjian Library next to the Prelacy of Aleppo, 22 May 2007. 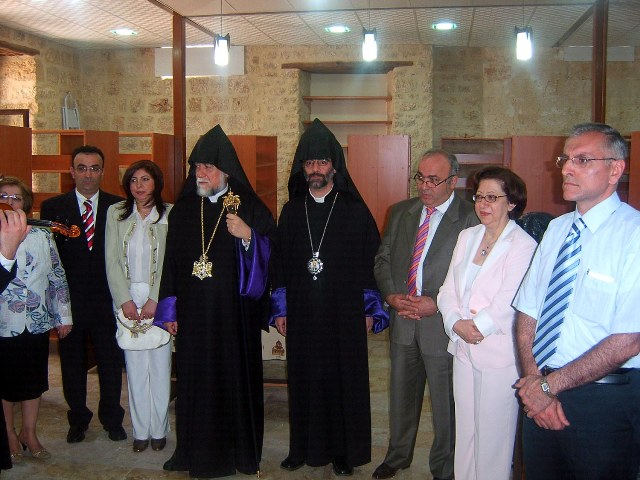