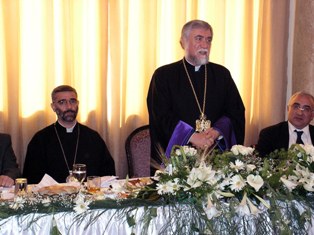 HIS HOLINESS CONSIDERED COLLECTIVE, ORGANISED AND HARMONIOUS LIFE TO BE THE BASIS OF ARMENIAN COMMUNITIES

ANTELIAS, Lebanon – ?The Armenian nation is a collective, not a group of individuals. A collective life means organized life. Organised life assumes harmonious life and cooperation. It is with this understanding that our communities should operate. Huge efforts were exerted to organize the Armenian communities after the Armenian Genocide. If today we have an organized Diaspora with a well-spread communal life and work, we should acknowledge that organizing it was not easy. Our church and political organizations played an important role in this task. Circumstances have now changed. Globalization has brought down all the walls and subjected national identities to danger. We feel its consequences and the resulting challenges every day,? said His Holiness Aram I speaking during a luncheon in his honor on May 20 in Aleppo.

Based on this new reality, the Pontiff stressed the importance of collective, organized and harmonious life in the communities, talking in detail about each.

The Catholicos also expressed his satisfaction at the level of organization of the Syrian Armenian community. ?Every time I visit here, I see the community has taken a step forward. During this visit there was an inauguration of a new school and a new church. In another area, the establishment of new sections in schools, the inauguration of new libraries. Our national life with all its fields is active,? he said.

His Holiness also greeted the very warm welcome he has received embodied in the large crowd of believers involved in all his visits and praised the Primate of the Diocese and community leaders. He also commended the spirit of unity, expressed once again during his visit, when all the organizations and unions of the Syrian Armenian community and their members attended the events organized during his visit, testifying to the wholeness of the Armenian nation and its goals; a phenomenon that finds its expression in the Dioceses of the Catholicosate of Cilicia.

Primate Bishop Shahan Sarkissian highlighted the historical importance of the Pontiff?s visit. He also emphasized His Holiness? international links and reputation, which he puts in the service of the Armenian Church, nation, fatherland, the Armenian struggle and the just resolution of the Nagorno Karabagh conflict.

About 300 guests from the community?s various organizations and unions attended the luncheon, providing another proof of the Armenian nation?s unity.

Upper-left Photo: His Holiness Aram I delivering his pontifical message during the official luncheon given in his honor in Aleppo 20 May 2007.