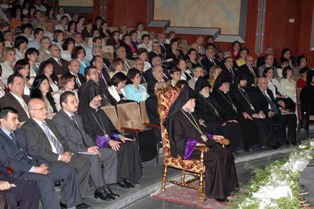 Event organized in honor of Catholicos Aram in Aleppo

ANTELIAS, Lebanon – The Primate of the Diocese of Aleppo, Bishop Shahan Sarkissian, and the Diocese?s governing bodies organized a public gathering on May 19 on the occasion of His Holiness Aram I?s Pontifical visit to Syria. The event, which took place in the ?Yessayan? hall in Aleppo was organized in honor of His Holiness, the Armenian Church, the Catholicosate of Cilicia?s holy mission and its Seminary. The large public attendance of the event served as a witness to the love, trust and faith that the Syrian Armenian community has towards the Armenian Church and its Pontiff.

Among the unending claps of large crowd, the Catholicos took the podium to deliver his speech. Referring to the previously made remarks about the importance of Antelias, His Holiness said: ?No matter how much we talk about Antelias, it is not possible to wholly and accurately characterize its crucial role in the life of the Armenian Church and nation particularly in light of the situation resulting after the Armenian Genocide.?

?The Cilician Seminary that was re-established in Antelias on 1930 played and continues to play a pivotal role in the formation of Armenians. Alongside its spiritual mission, it became an Armenian School through which the Armenian alphabet flowered in the lives of generations. It became the champion of restitution for our nation?s violated rights and for the achievement of the dream of a free and sovereign Armenia. However, we do not only look to the past and feel pride in the past; rather, strengthened by the past we see the future and walk towards it with determination,? emphasized the Catholicos.

During his speech the Pontiff also talked about the unity of the Armenian nation around its national values and ideals. In this respect, he particularly highlighted the role assumed by the Catholicosate of Cilicia. ?We will continue to exert efforts for our pan-national values and interests. If we adopt lenient and wise approaches, and we do adopt them, we do so consciously, bravely and only on the basis of our nation?s and fatherland?s collective and chief interests,? he said.

Prior to the Catholicos? speech, Bishop Shahan delivered the opening remarks during which he welcomed the Pontiff, ?who today is a shining presence on the Armenian Church with his unhesitating dedication and service. Under his wise leadership, our church?s and nation?s ship is guided safely to the shore.?

The Bishop also spoke about the Antelias Seminary, which for over 75years has provided important figures for the Armenian Church and nation, becoming a spirit and breath in the lives of the new generations. The Bishop particularly mentioned the later Catholicos Karekin I, ?a fruit of the Seminary in Antelias. Also, His Holiness Aram I, a graduate of the same Seminary, became of the brightest figures of the Armenian Church and nation with the skills of an internationally and ecumenically prominent leader. Each graduate of the Antelias Seminary feels proud to have been formed under that holy roof both as a man and as an Armenian.?

The main speaker of the day, chairman of the Pontifical visit committee Daron Avedissian, highlighted the important role of the Catholicosate of Cilicia in four points. He first talked about the Holy See?s work in spiritual, educational, cultural and national struggle-related fields. He then looked at the Catholicosate?s irreplaceable role in the current life of the Armenian Church and nation.

The Vicar for Jezire, Rev. Fr. Masis Zobouyan, a former student of the Antelias Seminary, spoke briefly about its mission in the formation of generations.

The event included an entertainment part featuring performances by two choirs and piano performances. The event concluded by the blessing of His Holiness.

Photos 1 and 2: Event organized in honor of His Holiness, the Armenian Church, the Catholicosate of Cilicia?s holy mission and its Seminary, 19 May 2007, Aleppo.

Photo 3: Primate of Diocese of Aleppo Bishop Shahan Sarkissian offering an 18th century historical challis to His Holiness Aram I, 19 May 2007.