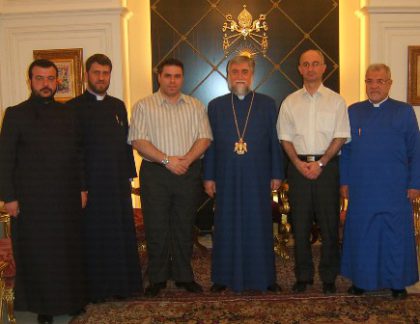 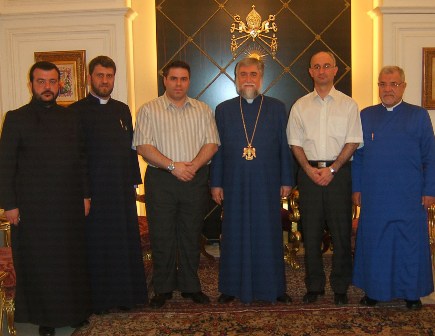 His Holiness Aram I, Catholicos of Cilicia, received Kevork Vartanian and Robert Peklarian, the representatives of the Armenian community of in the Iranian Parliament, in his office in Antelias on 5 June 2006. The MPs were accompanied by the primates of the three Armenian dioceses of : Archbishop Sebouh Sarkissian (), Bishop Papken Charian () and Bishop Neshan Topouzian ().

The meeting lasted over an hour. The MPs and Primates informed His Holiness of certain circumstances created as a result of recent developments. They stressed that despite recent sensitivities, particularly those created by Azeris in , the three dioceses are well organized, active and are carefully following the situation through constant contact. Internal diocesan and inter-diocesan issues were also discussed.

His Holiness advised vigilance and constant consultations for the sake of protecting the Iranian-Armenian community?s interests at times like these.

His Holiness held separate meetings with the primates and diocesan council representatives of the Eastern Prelacy of the , Diocese of Tabriz and Diocese of Isfahan. The representatives arrived in to attend the ordination of Bishops in the St. Gregory the Illuminator Cathedral on 4 June 2006.

The Pontiff listened to the reports of the representatives on the efforts carried out in their dioceses, their new projects and concerns. His Holiness then gave his advice to each diocese.

The Pontiff praised the representatives of the Dioceses and their efforts, expressing hope that the upcoming bishops? ordination would bring new activeness into the life of dioceses and their spiritual service.

17th anniversary of the death of Imam Ruhollah Khomeini

His Holiness delivered the above message during an official commemoration held in on 6 June 2006 on the occasion of the 17th anniversary of the death of Imam Ruholla Khomeini, founder of the Islamic Republic of Iran.

“One of the greatest conflicts of current society is the fallback in moral values. We see this worrying phenomenon in families, in structures that function within societies, in government institutions and in the current world order in general. The health of a society does not rely on its political, military or economic power, but on the existence of moral values. Where moral values are absent, injustice, insecurity, violence, human rights violations and all kinds of evil reign. Thus we consider the return of moral values an imperative necessity,” wrote the Catholicos in his message.

The Pontiff?s message was read out by the Primate of the Diocese of Tabriz, Bishop Neshan Topouzian. The representative of the Lebanese Parliament?s speaker and the spiritual leaders of the country?s Christian and Muslim communities also gave speeches during the event.

Catholicos I receives the parliamentary members of the Armenian community of Kevork Vartanian and Robert Peklarian. In the photo you can see also the primates of the three Armenian dioceses of Iran (5 June 2006).