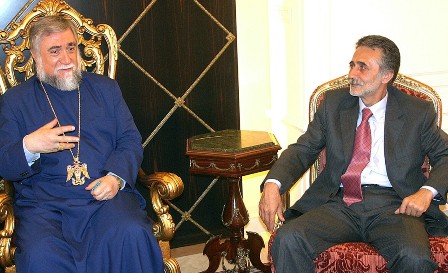 The Minister of Foreign Affairs of the , Georgi

visited Antelias, where he met with His Holiness Aram I on 6 June 2006. Serj Amirkhanian, the head of construction works in the republic and Yervant Pamboukian, member of the Central Executive Council in also attended the meeting.

The meeting also provided an opportunity to reassess the internal situation in Karapagh and the international negotiations for the resolution of the conflict.

The minister was then invited to have lunch with the Catholicos.

The Catholicosate of Cilicia donates US$ 100.000 for a new church in Nagorno Karabakh

There are plans to construct a mother cathedral in the capital of Nagorno Karabakh Stepanakert and construction works have already started.

“Let us once again affirm the Catholicosate of Cilicia?s and Our personal commitment to support all efforts that aim to the strengthening and development of and Karabakh,” wrote the Pontiff in his letters addressed to His Holiness Karekin II, Catholicos of All Armenians and Arkady Ghoukassian, the president of the .

Catholicos Aram I (left) and the Foreign Minister of the Republic of Nagorno Karapagh (right).

The Azerbaijani Ministry of Foreign Affairs is going to take diplomatic demarche steps in respect to , Tahir Tagizade, the head of the Press and Information Department of the Azerbaijani Foreign Ministry, told Trend. He was commenting on the news article placed on the website of the President of Lebanon on 6 June 2006.

President Lahoud is reported to have a meeting with a delegation of the Armenian Tashnak Party headed by its secretary general Hovik Mkhitarian.