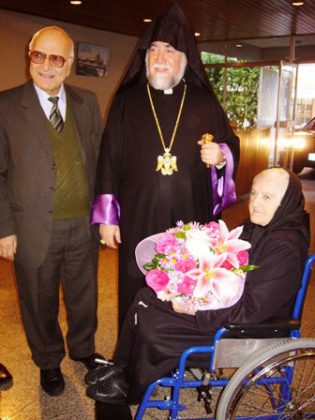 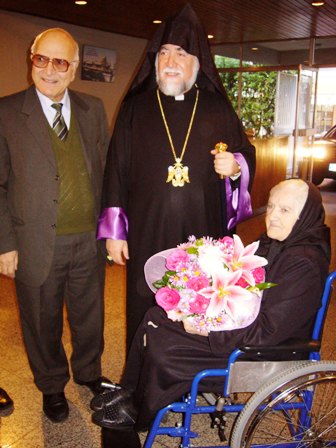 His Holiness Aram I and Cilician Brotherhood members attended Christmas and New Year celebrations in the National Old People's Home for Armenian elderly and the “Birds' Nest” orphanage, spreading joy and warmth to the hearts of the young and old sheltered Armenians. A delegation from the Cilician Brotherhood also visited the Azounieh National Sanitarium and Armenian prisoners.

The Armenian Catholicos visited Thursday the Armenian National Old People's Home in Bourdj Hammoud, where director Kevork Karaboydjian, the members of the Board of Trustees and the sheltered elderly put on a very warm welcome.

A tangible expression of the Christian Church's humanitarian service mission, the Pontiff's visit aimed at spreading the joy of the holidays to those in his flock in need of love and care. His Holiness was welcomed and cheered amidst joyous smiles and heart-spoken wishes.

Mr. Karaboyadjian delivered the opening remarks of the luncheon organized on this occasion, stressing that in addition to his annual visits, His Holiness continued support is a driving force for the institution's senior and junior employees to further service and commitment.

The elderly expressed their happiness by singing and performing special poems. Others spoke words of gratitude to the Catholicos and the managers of the institution.

At the end of the luncheon, His Holiness addressed the elderly with warm wishes on the occasion of Christmas and for the New Year. “You have done all you can for our nation and now our nation is doing what it can for taking care of your health and providing you with a safe shelter,” the Pontiff reassured the elderly. He praised the institution's director, members of the Board of Trustees, staff and all those who voluntarily commit themselves to the service of the sheltered. Finally, he commended all the contributors and philanthropists, named and unnamed, for their continued financial support to the welfare of the Armenian elderly.

In the afternoon of the same day, His Holiness shared the joy of Christmas with Armenian children sheltered in the “Birds' Nest” orphanage under the direct care of the Catholicosate of Cilicia. The Pontiff's care for these institutions spreads throughout the whole year with the cooperation of its Board of Trustees and a special committee he has established himself.

The Dean of the “Birds' Nest”, Rev. Paren Vartanian briefed His Holiness on the activities carried out by the institution and its future plans. They plant Singing hymns

The Armenian spiritual leader then attended the Christmas and New Year celebration, patiently listening to songs and poems of the innocent children, as well as their wishes and dreams for 2007 in their second home and shelter.

Compared to international humanitarian institutions, this small house of the Armenian nation is a relatively modern shelter for orphaned Armenian children and those from unfortunate families. It is one of the important dimensions of the Catholicosate of Cilicia's mission, embodying the Church's humanitarian nature.

In his fatherly words to the Armenian children, the Catholicos called on them to be good human beings, exemplary Armenians, hard-working students and honest and decent citizens. He also praised all the philanthropists and Armenian supporters who hold the “Birds' Nest” close to their hearts both financially and morally supporting the Armenian orphans.

VISIT TO THE ARMENIAN NATIONAL SANITARIUM

Members of the Cilician Brotherhood visited the Azounieh Armenian National Sanitarium congratulating the Christmas and New Year of the sheltered. They planted spiritual satisfaction among the elderly and the ill by singing hymns, reciting the gospels and performing a number of beautiful songs.

The brotherhood members also visited the rooms of those confined to bed, praying for them and talking with them and thus consoling those suffering from physical pains and distanced from their families.

His Holiness Aram I also delegated Cilician Brotherhood members to bring the joy of the season to the cells of Armenian prisoners across . They performed short church service for the spiritual satisfaction of the prisoners, listened their confessions, the difficulties they faced and provided them guidance.

The Brotherhood members also met with the managers of the prison, presenting their proposals for the betterment of living conditions in the prison specially for Armenian prisoners.

Christmas gifts were distributed in all the above institutions and the Armenian prisoners corresponding to the individual needs of each of the sheltered.

Source: Newsletter of the Catholicosate of Cilicia, issue number 143, 30 December 2006