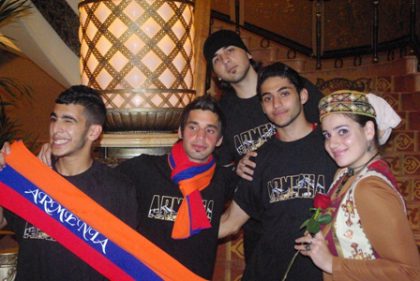 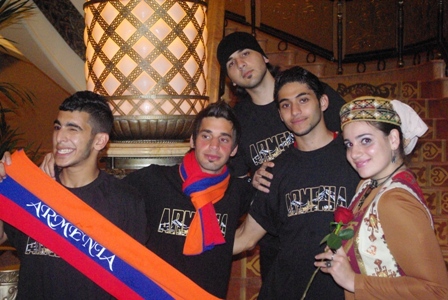 Armenia was recently a participating country in an international event that took place in Emirates Palace in Abu Dhabi, UAE. The event took place on March 31st,  2011, called Small World, and was the closing ceremony of EWB (Education Without Borders, Biannual Education Conference). It was aimed to be a fundraising for a children?s charity organization, nominated by each country.

Armenia nominated Naregatsi Art Institute, which is a philanthropic non-profit organization whose main purpose is to preserve Armenian culture and heritage. Matching the 21st century lifestyle, Armenian artists show their devotion to culture through contemporary art in fields of painting, sculpture, photography, architecture, music, film, theatre, poetry, essay and fiction etc., along with many youth programs for children and those in need.

During the event Armenia had its own booth that was serving Armenian pomegranate wine and brandy, along with chocolates, juices and the traditional sweet soujoukh, all imported from Armenia directly for the event and fully sponsored by the Armenian Embassy. Guests were enjoying the spirit of Armenian hospitality, had their names written down in Armenian calligraphy and took home booklets about the country and its history. The biggest appreciation goes to the major support of young fellow Arabs from Palestine, Lebanon, Syria, Tunisia, Iraq and Jordan, as well as Mariana Markosian from Armenia and Chanael Brioval from France who agreed to volunteer for the Armenian booth for the entire day. National Geographic photographers Samer Abbas and Nawal Khouildi were in charge of media coverage for the Armenian side. It was a great pleasure to realize that the flag carrier of Armenia Bahaa Fadloun was Syrian, yet called it an honor to carry the flag in the opening flag parade.

Each country had prepared a dance performance of three minutes. Armenia was not an exception. The hip-hop dance crew from Abu Dhabi, along with Daniella Melikian prepared a modern Armenian dance routine with a nice element of surprise in the end. The performance was a fusion of traditional Armenian and elements of freestyle hip-hop, to the song of Inga and Anush Arshakian ?Menk Enk, Sarere Mer?, a very strong and patriotic song.

The event raised AED 1.5 million, thanks to ticket sales and sponsors contributions, some of which were major companies like Mubadala, du, TAQA etc. From the amount AED 750.000 was directly donated to Japan?s Red Cross as a priority country in need. The rest was equally divided among the participating countries. Each country will be donated an equal amount of AED26,786.

A big gratitude and appreciation goes to the numerous nationalities who made this event a success and helped keeping Armenia on the highest standards.

I am very pleased to be the patron of ?Small World -Abu Dhabi 2011″ taking place in Abu Dhabi on the 31st of March 2011. I am particularly pleased that this event will raise money to support children in need around the world children whose circumstances have precluded them the possibilities that we in the UAE have come to enjoy and take for granted. With our support, children who will benefit from this event will have further opportunities, advantages, and care. I thank everyone who will participate in this day of cultural celebrations. I appreciate your strong sense of social responsibility and commend each of you for your most generous efforts to help the less advantaged among the world?s citizens to achieve their full potential.?