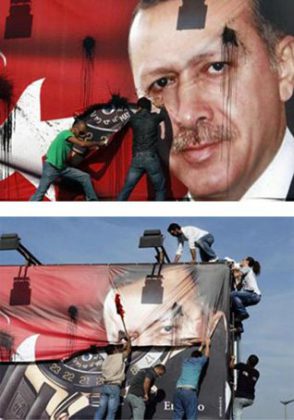 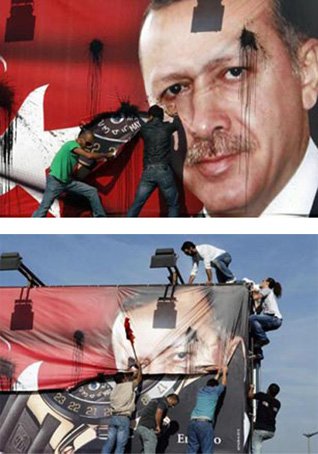 Lebanese protesters of Armenian descent clashed with security forces Thursday during a demonstration against the visit of Turkish Prime Minister Recep Tayyip Erdogan.

Members of the Armenian community in Lebanon organized the protest in Downtown Beirut to condemn Erdogan?s two-day visit, which started Wednesday. Erdogan had met with Lebanon?s three top officials and held visits to north and south Lebanon to inaugurate a school and a hospital.

The peaceful protest turned violent when a number of demonstrators tore up a large poster of Erdogan hanging opposite the landmark Martyrs statue and hurled rocks and black oil toward the banner.

?Security forces countered the rioters by beating up some, but no one was seriously hurt,? an eyewitness said.

However, a security source speaking to The Daily Star denied any rock hurling had occurred and said the incident was limited to ?fistfights.?

?Pakradounian insisted the demonstration remained calm because Erdogan was on an official visit to Lebanon,? the source added.

However, the Turkish prime minister?s picture was removed ?to preserve the dignity of martyrs and to pay respect to their souls,? Pakradounian said, noting that the poster insulted both the Lebanese and Armenian people.

A similar protest was held by the Armenian community in Lebanon Wednesday outside the airport, while a rival gathering of more than 100 Lebanese students welcomed Erdogan.

For his part, Armenian Orthodox Archbishop in Lebanon Kegham Khatcherian warned Lebanon and the Arab world against surrendering their leadership to foreign powers, saying ?we are protesting in Martyrs Square not against an official visit or against an agreement, but to prove to this visitor [Erdogan] and to the entire world that we will not keep quiet about our inherited right.?