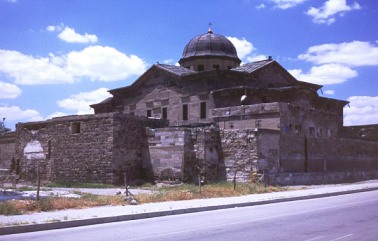 KAYSERI, Turkey ? Rows of homes that used to be part of Kayseri?s Armenian quarter and housed up to 400 families are now dilapidated and lay empty or are filled with squatters.  The district is a symbol of the tragic history between Armenians and Turks during the last century, a history plagued by animosity and violence.

But in the center of that district stands a 900-year-old Armenian church, defiantly active and restored as a reminder of the better days of Armenian history in Turkey.

Earlier this year, U.S. President Barack Obama issued a statement in remembrance of the Armenian ?Great Catastrophe,? calling it ?one of the worst atrocities in the 20th century.?  According to various estimates, 300,000 to 1.5 million Armenians died during World War I after being forced from their homes by the Ottoman Empire, now modern Turkey. The Armenian National Committee of America said the president made the ?wrong choice? in not using the word ?genocide.? Armenians have strongly pushed the United States to officially recognize the events in Ottoman Turkey as a genocide.

However, one group of Anatolian Armenians (from Turkey?s Asian side) prefers to look beyond the polarizing rhetoric in an attempt to preserve what remains of their history in Kayseri: their 900-year-old church.

?We try to remember the importance of religion.  It?s our most important cause. Our foundation doesn?t think about politics,? said Garbis Bagdat, director of the St. Gregory Church Foundation.

Hidden behind a ten-foot stone barricade, the St. Gregory the Illuminator Church is one of only seven Armenian churches still functioning in Anatolia.

?When we visit, our old Kayseri neighbors are always asking us why we left and why we don?t come back,? Bagdat says. ?Most of them say they would like us to come back.?

Bagdat prefers to remain with the majority of his community now in Istanbul, but his foundation is determined to preserve the pieces of history remaining in his former home.

The Kayseri Church has added importance because the community believes St. Gregory passed through the city and established an earlier church constructed of wood in the same location.  St. Gregory was the first leader of the Armenian Church and is credited for converting the pagan Armenians to Christianity during the fourth century.  Kayseri served as a major Armenian center for centuries before losing prominence in the late Ottoman period.

Bagdat?s group recently completed interior restorations.  They revitalized old frescoes, furnishings, and statues.  The community capped off the efforts with an inaugural service last November with the Armenian Patriarchate presiding.  Since then, the church has seen regular Armenian visitors from Istanbul, Armenia, Europe, and the United States, including a group of Istanbul Armenians now living in Los Angeles.

?Having this church here, the only church, is very symbolic for us,? said Sylvia Minassian whose grandfather came from Kayseri, ?We would like to preserve it as much as we can, as long as we can because it shows there was a Christian life here.? 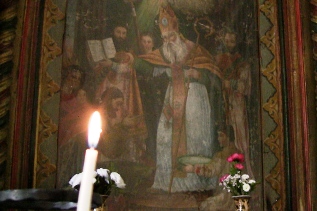 Minassian grew up in Istanbul.  For her, Turkey is home.  She watches Turkish television, speaks to her mother in Turkish, and feels less animosity towards Turkish people.

?Our feelings are not as strong as some of the other Armenians whose families went through certain disasters and tragedies and they ended up in other countries,? Minassian said, ?We never knew about [the other] history because our parents never taught us those things.?

Bagdat believes the Kayseri Church can serve as a reminder the city?s Armenian past for future generations.  Bagdat says the Turkish government has been extremely helpful and has never stood in the way of his group?s mission to restore the church to its former glory.

?We are on a good path,? says Bagdat, ?Twenty years ago, the situation was much worse.  Nobody would speak about Armenians, and we wouldn?t speak because of Armenian terrorism outside of Turkey.  We were afraid.?

But now, he says discussion are more open and he has had visitors from the Turkish government who want to learn more about the church.

For the last few years, Turkey has worked to normalize relations with its Armenian neighbors.  Some feel that one of the key provisions for normalization would be an independent examination of the historic tragedy.

Turkish Foreign Minister, Ahmet Davutoglu, spoke to reporters with hope about the future. ?As Turkey, we are ready to share the pain of our Armenian neighbors,? said Davutoglu. However, he preferred to use the word pain versus genocide in his remarks.

Turkey continues to see the deportations, what some Armenians view as death marches, as tragedies during wartime.  Turkish historians often refer to Turkish losses in Gallipoli and in its eastern provinces as equivalents.

It?s an issue that continues to agitate, and even Minassian believes this remains the biggest obstacle to more normal relations between non-Turkish Armenians and Turkey.

?What hurts them [Turkey] the most is the non-accepting of what happened,? said the visiting Minassian. ?I think that if they accepted it a long time ago, nobody would have blamed the new generation because it happened in the old empire.?

Bagdat says he prefers to ?close his ears? to the issue because he lives in Turkey.

For him, Turkey is his home.  He chooses to stay, and lives among many Turkish friends.  Politics isn?t his issue. He chooses to keep his heritage by protecting the Kayseri church.

?The church is the life of the Armenians,? Bagdat says. ?Every Armenian is attached to their church.?

With one year left as foundation director, Bagdat will continue his restoration campaign.  The next step is to revitalize the church?s large courtyard.

The church will continue to hold four services each year when approximately three to four hundred Armenians are anticipated to worship behind those cobblestone walls like their ancestors did for over a thousand years.

For the Kayseri foundation, the church remains a chance to keep history alive.

Photos:
1- Outer view of the church.
2- A restored painting of St. Gregory the Illuminator inside the church (Matt Porter photo).