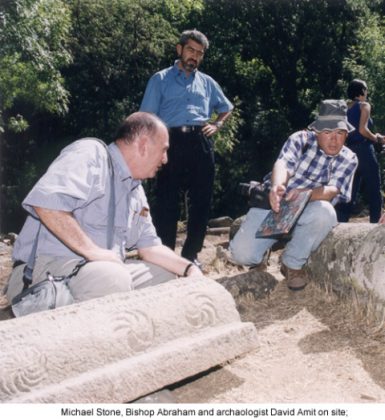 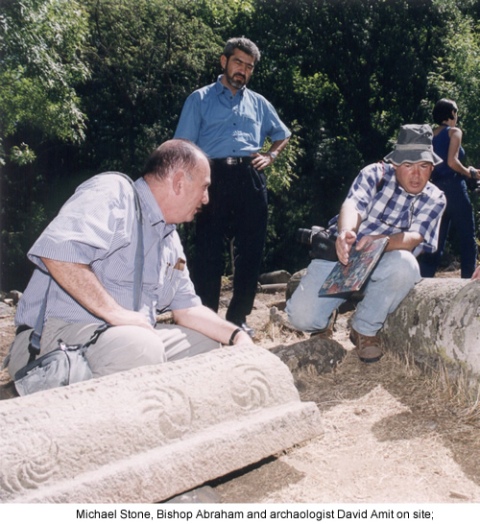 For ages, they had lain undisturbed and forgotten, in the distant field of a foreign land, by the churning waters of a mighty river, asleep in their last earthly domicile.

Ten years ago, for the first time in over seven centuries, they were finally rediscovered and recognized, the veil of mystery enveloping an ancient Jewish cemetery in Armenia, removed forever.

But few outside the archaeological and academic worlds of Jewry and Armenia knew about the momentous discovery. That historical oversight is now being addressed with a ceremonial rededication to be held within the next two weeks.

The discovery was made by an Armenian priest, who happens to be Bishop Abraham Mkrtchyan, Primate of the See of Sunik. And it has been mainly due his tireless and indefatigable efforts that the world will come to hear of the unknown Jewish community at Eghegis, in the country's Vayotz Dzor region which had been the largest district of the kingdom of Siwnik, founded in 987.

He has been assisted in his labors by the Armenian Ministry of Culture, who footed most of the bills, and teams of archaeologists and researchers from the Hebrew University of Jerusalem  and from Armenia.

The rededication, which will be attended by high religious and political dignitaries from Israel and Armenia, will also serve as the springboard for a history of the Jews in Armenia, on which professor Michael Stone of the Hebrew University and Dr. Aram Topchyan of the Institute of Ancient Manuscripts in Yerevan, will be working. The ceremony will be follwed by a two-day symposium on May 22.

The renovation of the site has just been completed and the event will “to provide a point of meeting between Jews and Armenians, between Judaism and the Armenian Apostolic Church,” according to Stone, a leading Armenologist.

The find has been a major surprise for academe.

“There was no evidence adduced from the previously known literary and historical sources for a Jewish community in Armenia in the Middle Ages,” Stone points out.

Indeed, the evidence for Jews in Armenia at any period is very sparse, the best known sources (Movses Khorenatsi and P'awstos Buzand) referring (with greater or lesser reliability) to a Jewish settlement there in the first century BCE and others to Jews in Armenia in the nineteenth century.

“A Jewish settlement of the type implied by the Eghegis cemetery is a new historical fact and the inscriptions on its tombstones are new evidence,” Stone notes, adding they reveal a previously unknown and unsuspected medieval Jewish community and highlight the complexity of the population of Vayotz Dzor.

One plausible explanation for the presence of Jews in Armenia stems from a passage in the Midrash Ekha Rabbati (which belongs to the period of the Palestinian Talmud) where God wonders what to do with His people.

If He exiled them “through a desert, they will die of hunger; so I will exile them through Armenia, where there are towns and provinces and food and drink,” (1.42).

The people buried at Vayotz Dzor appear to have been prosperous burghers, as evidenced by the expensive tombstones, a conclusion archaeologists arrived at after noticing the great similarity with the tombstones of the local Armenian rulers.

“In addition to their Jewish learning, these well-to-do, educated Jews of Eghegis had close contacts with their non-Jewish neighbours and show a certain level of cultural assimilation. These seem to us to be characteristics, not of a new, immigrant community but of a well-established community,” Stone says.

The oldest date carved out on the tombstones is 1266 and the latest 1336/7, making this perhaps the most impressive Jewish cemetery of the East from the period, and certainly one of the oldest oriental Jewish cemeteries, archaeologists say, and indicating that the cemetery was in use for nearly a century.

Some 64 complete tombstones and fragments of a number of others were uncovered at Eghegis, bearing nearly twenty inscriptions, all in Hebrew except for two which were in Aramaic, bearing traditional Jewish names like Elia, Baba, Michael, Esther and Tsvi.

“Many set phrases, common on Jewish tombstones from East and West have been discerned, and most of these use standard abbreviations. This all leads us to conclude that these were Rabbinite Jews, and not Karaites. They were learned in the Jewish tradition and some of the inscriptions are literary compositions of considerable merit, and not just records of dates of death or interment,” according to Stone.

The Eghegis Jews would order their tombstones from the workshop that supplied the tombstones of the ruling family of the region. The Jewish stones are no less impressive in size and decoration than the aristocratic Armenian ones.

The archaeologists were pleasantly surprised at the rich repertory of decorative elements on the stones.

“There are purely decorative, geometric designs and there are also some figurative decorations,” Stone said, with the rosette, the interlace, and the whirling rosette prominent.

“All these decorative elements are also to be found in the Christian art of Vayotz Dzor in the same period. Among the Armenians, to this day, the whirling rosette is the symbol of eternity or eternal life,” Stone says.

Archaeologists are inclined to believe that the Jewish community of Eghegis was founded by refugees from the Seljuk incursions in 1103 and the wars that followed.

Jewish scholars rate the discovery of very considerable importance, providing graphic evidence of the existence of a Jewish population in Armenia in the Middle Ages.

But this was not an isolated Jewish community in medieval Armenia.

“The Jewish presence in Armenia provides a link between the old, well-established Jewish community in Iran, and other Caucasian and Pontic Jewish communities, and those even further north,” Stone says.

Some of the inscriptions on the tombstones are unique in Jewish funerary practice because of their long, literary texts. This is particularly true of the tombstones of children and youths, boys and girls, where the parents' grief is expressed in  moving terms.

One inscription on a girl's tombstone evokes the cry from the heart of grieving parents who ask “the Merciful One [to] forgive and pity and have mercy on the soul of the girl, the […] virgin, Esther daughter of Michael.”

Another inscription on a woman's tomb warns that “as it is written, 'Charm is deceitful, and beauty is vain.'”

What other secrets the might river that meanders by Eghegis holds in its unravelled depths, we shall perhaps never know.