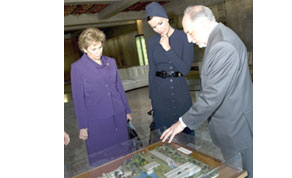 Sheikha Mozah and the Portuguese president?s wife were briefed about the rare art objects, collected in the beginning of the last century, and the Foundation?s various departments, which include an education centre and the Modern Art Centre as well as auditoriums and exhibition halls.

Sheikha Mozah toured the Foundation where she was briefed about the Art Library, the Fine Arts Center and the Music Department.

The Calouste Gulbenkian Foundation is a Portuguese private foundation of public utility whose statutory aims are in the fields of arts, charity, education, and science. It was created by a clause in the will of Calouste Sarkis Gulbenkian, a petrol magnate of Armenian origin.

Sheikha Mozah also visited Lisbon Cathedral, the oldest church in the city, which was built by King Alfonso Henriques in 1147.

The Cathedral?s building has been modified several times and survived many earthquakes. It is nowadays a mix of different architectural styles.

Sheikha Mozah toured the cathedral and was briefed about its ancient history and its unique sculpture drawings and architecture.

Sheikha Mozah bint Nasser Al-Missned (or Al-Misnad) is the second of the three wives of Sheikh Hamad bin Khalifa Al Thani, Emir of the State of Qatar. She is the daughter of Nasser Abdullah Al-Missned.

She graduated from University of Qatar in 1986 with a BA in Sociology and holds several posts in Qatar and internationally:

She has seven children, five sons and two daughters.

Unlike many other monarchical wives in the Middle East, Sheikha Mozah has been a high-profile figure in her nation's politics and society, actively involved in Qatar's government. She was a driving force behind Education City and Al Jazeera Children's Channel. Additionally, she has been named as one of Forbes' 100 Most Powerful Women at #79.