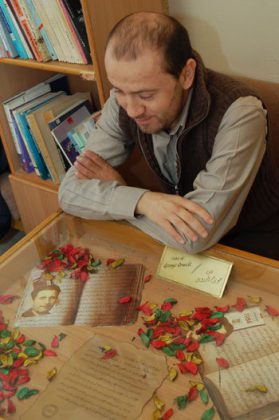 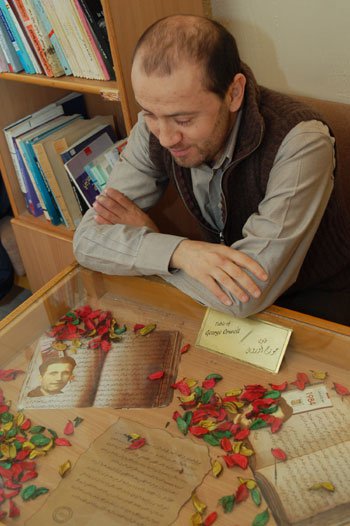 Saghatel Basil is a young man from Aleppo, whose dream to further his higher studies was shattered by an accident that left him almost completely blind.

Saghatel did not give up and decided to start a new project that was not much different from the previous one in content; he challenged his own disability and worked hard to make his other dream come true, thus, earning the respect of everyone around him.

In an interview with a Syrian website Saghatel explains the new direction in his life: “After obtaining my degree in Political Science in Yerevan I had an accident and lost my sight. I returned to my hometown Aleppo and started looking for things that I love. It turned out that they were all about art, books and socializing, so I came up with the idea of a caf?, the concept of which was different from the traditional ones that are abundant in Aleppo, a caf? that serves drinks and has a library, plus a hall for exhibitions. I was inspired with the idea from Armenia, where I worked in a similar caf? called Art Bridge, where snacks were served and books were sold side by side”.

In Aleppo Saghatel chose the name Art River for his caf?, since, according to his belief, a river represents movement, life and continuity.

The caf? was opened in July 2005 with an art exhibition, a tradition that was continued since then, hosting the works of many new or established artists.

“I have to mention that our aim is not financial at all, we ask for a symbolic amount in return for displaying the artworks, only SYP 1.000 (around US$ 20) for a whole month. So far we have had 24 individual and collective exhibitions,” he adds.

The caf? already has its regular visitors; they are from all walks of life. Sometimes poetry nights are held, where poets read from their newly published book and the attendants discuss and ask questions. This is the kind of atmosphere Saghatel was seeking for, and he has certainly made it happen.

There's a big library in the caf? with hundreds of books that were part of his personal collection, now at the disposal of the public. Young or old, student or not, you can spend hours in this cozy place and enjoy a cup of hot chocolate with light music and go through your textbooks or any of the library books and at the same time enjoy the paintings or the photographs on the walls.

Saghatel is trying to establish a corner for Syrian literature and a section specially for authors from Aleppo. He has gathered books by Samir Tahhan, Kheir Aldin Al-Asadi and Walid Ikhlasi, to mention a few.

Saghatel even tried to use the caf? tables to enhance the cultural mood of the place; every table has a story and is named after an international author or a poet or an artist, you can find writings under the window- surfaces by Jibran Khalil Jibran, Nizar Qabbani,  Muhammad al-Maghut, Paruyr Sevak, William Saroyan, T. Dostoyevsky, George Orwell, etc.

Saghatel has made many friends in the caf? over the years, he says: ?The most beautiful thing is meeting people and liking them without seeing their faces. Such a friendship is stronger than seeing them; since I imagine them according to their voices and the way they speak and express themselves. Whenever I am around them, I feel more humane.?

Well, we certainly wish that the concept of the caf? becomes contagious and we can soon find more places that offer not only food but also food for thought!

Below photo: Saghatel Basil next to a statue of the famous Armenian satirist Hagop Baronian (1843?1891) during a recent visit to Istanbul. 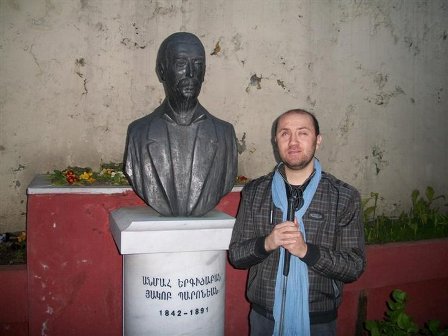