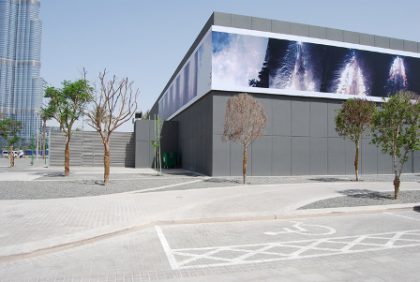 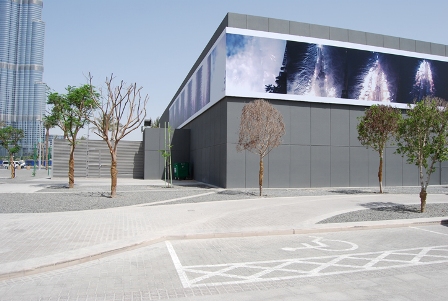 The work is called “The Unimaginable Things We Build” and represents a strip of static photographs taken from user-generated cell phone videos documenting the historic launch of the tallest building in the world, Burj Khalifa.

The commission comes in the shape of 40 meters banner wrapping the Pavilion's building fa?ade (see photo).

According to the Pavilion's website, “The Unimaginable Things We Build examines the Burj?s discourse from its construction period to its launch. As the building was being erected, the property developers had placed a large billboard outside the construction lot displaying the slogan: ?history rising?. The continuous announcement was constantly updated with the number of floors completed. However, in such an upward drive, what happens when history ceases to rise? Did the Burj Khalifa wonder what to do with itself upon its historic completion? Was the incessant over-utterance of floors completed a hysterical reaction to the realization that the end is near? Perhaps it was in the hopes of forever extending this rise that the Burj refused to declare its final height until its explosive inauguration.”

Photos:
1) The facade of the Pavilion.
2) With curator Rasha Salti at the 10th edition of Sharjah Biennale (2011). 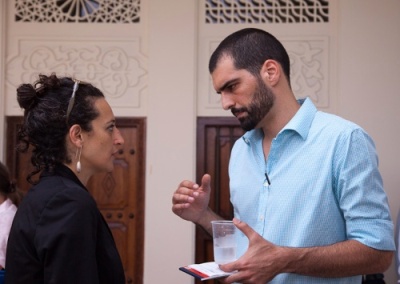 Aivazian is an artist, curator and writer currently based in Chicago. He has a Bachelor of Fine Arts from Concordia University (Montreal, Canada), in design and studio art, and is in the process of acquiring an Master's degree in Art Theory and Practice from Northwestern University.

Aivazian was born in Lebanon and his family relocated to Sharjah in the mid-1980s, where they remained, thwarted from returning by the Lebanese civil war and latterly, the first Gulf war. In 1999, he enrolled in a Bachelor of Fine Art programme in Montreal, Canada, where he stayed for five years, developing not only his own artistic practise, but also engaging with the city's intelligentsia, soaking up a variety of influences. Since returning to the Middle East in 2005, Aivazian has been a regular fixture on the local arts scene, as exhibitions director at The Third Line, a position that has seen him facilitate and shape the artistic direction of the progressive Dubai gallery (The National, 01 September 2008).

Aivazian?s work has been investigating the intersections between the migration of peoples, the circulation of consumer goods and the propagation of idealogies. He has been involved in a number of curatorial initiatives including Roads Were Open / Roads Were Closed (2008), and more recently, as associate curator of the 10th edition of the Sharjah Biennale (2011). He has shown his work in France, Canada, the UAE and the USA, and the first installment of his ongoing project FUGERE (a series of Olympiadic events), was commissioned and exhibited in the 9th edition of the Sharjah Biennale (2009).