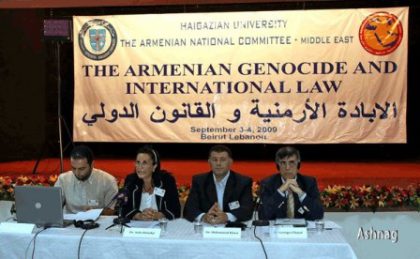 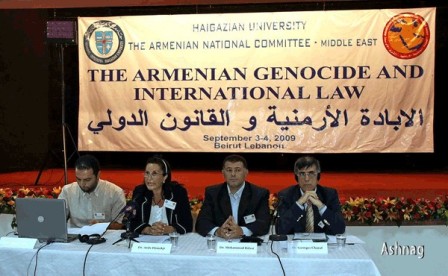 A conference to discuss what is termed the Armenian genocide will be the first gathering of its kind in the Middle East to bring together Armenian, Turkish and Kurdish views.

Participants at the two-day event in Beirut, which starts today, will discuss how the international community and international law should recognise the First World War events.

Armenia asserts that as the war was ending 1.5 million people died when Ottoman authorities drove Armenians from a region of eastern Anatolia that was known as Western Armenia.

Armenia and its diaspora, along with many other countries and individual US states, describe the massacres as genocide, although Turkey does not, and insists the death toll was much lower and that many Muslim Turks died in what it says was wartime unrest. This week Armenia and Turkey announced plans to establish diplomatic relations for the first time.

Turkey closed its border with Armenia in 1993 in protest against Armenia?s support for the breakaway region of Nagorno-Karabakh, previously controlled by Azerbaijan. But this week, Turkey said it hoped to open the border by the end of the year, and the two countries have given themselves six weeks to finalise accords over establishing relations before presenting them to their respective parliaments.

The protocol to establish diplomatic ties does not detail how the genocide accusations will be dealt with, although one suggestion from the Turkish side has been that a historical commission is established to look into the issue.

Issues being focused on at the academic conference, titled The Armenian Genocide and International Law, include genocide denial in Turkey, alleviating the consequences of genocide and how the massacres have affected Kurdish-Armenian relations.

Another subject is the evolution of the Armenian genocide denial in the Turkish press, which is likely to note that media in Turkey now more readily use the term genocide than before.

Beirut has one of the largest Armenian communities in the Middle East.

Antranig Dakessian, a conference organiser and executive secretary of the Haigazian Armenological Review, published by Beirut?s Armenian university, Haigazian University, said the conference was not debating whether the massacres were genocide. Instead, it will look at the reasons behind what Mr Dakessian called ?genocide denial?.

Such events as the conference were important for ensuring the killings that occured as the Ottoman Empire crumbled were not forgotten, he said.

?When you are in such a terrible situation or your grandparents have undergone such a condition, you would like the world to share with you,? he said.

Also, he said, the impunity of those responsible for the genocide has encouraged other people to commit genocide.

However, Mr Dakessian, a Lebanese-Armenian whose grandparents came from what was Western Armenia, said the event would consider issues such as how genocide should be dealt with by the international community to prevent recurrences.

Mr Dakessian said the conference would not be preoccupied with the question of whether the killings were genocide, since for Armenians this was historical fact.

?The Armenian genocide is an established reality,? he said. ?We have to overcome that issue of whether it occurred. We?re trying to highlight how to deal with the consequences.?

Another organiser, Vera Yacoubian, executive director of the Armenian National Committee Middle East, and the great-granddaughter of Armenians driven from former Western Armenia, said similar conferences have been held before in Europe or the United States, but not in the Middle East.

She said she believed some Turkish participants do not recognise the killings as genocide, so the conference would see a variety of views expressed. ?They may say there were massacres,? she said. ?We have people at the conference [who hold these views], but I?m not sure if they will say these things at the conference. I hope they do.?