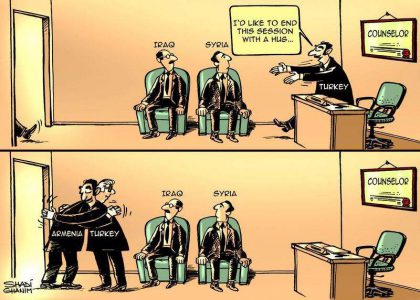 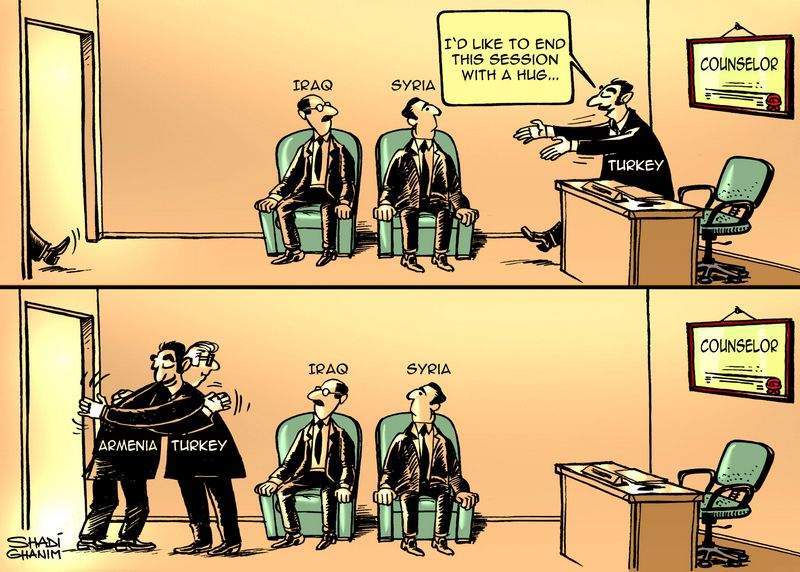 By Thomas Seibert
Foreign Correspondent of “The National”
Istanbul

In a historic agreement almost a century after up to 1.5 million Armenians perished in massacres in Anatolia, Turkey and Armenia have reached an accord to establish diplomatic relations for the first time.

But warnings by Ankara and by Turkey?s ally Azerbaijan immediately made it clear that complete reconciliation will be much harder to achieve than an exchange of ambassadors.

?We know that it will be a long process,? Ahmet Davutoglu, Turkey?s foreign minister, told the Turkish news channel NTV yesterday. ?But every long process begins with a first step.?

Late on Monday, after months of talks under Swiss mediation, the foreign ministries of Turkey, Armenia and Switzerland said a breakthrough had been reached.

Turkey and Armenia gave themselves six weeks to complete their internal discussions. Then the protocols are to be signed and submitted to parliaments in Ankara and Yerevan for approval.

?Both sides will make their best efforts for the timely progression of the ratification in line with their constitutional and legal procedures,? the statement said. ?The normalisation of the bilateral relations will contribute to regional peace and stability.?

Turkish media said the agreement ushered in a new era. ?Historic step with Yerevan,? said a headline in yesterday?s Milliyet newspaper. The news channel CNN-Turk published drafts of the protocols on its website.

According to drafts of the protocols posted on the Turkish foreign ministry?s website yesterday, Turkey and Armenia agreed to open their border two months after the documents come into force. The border has been closed since 1993.

The border issue is one of several thorny issues between the countries. Turkish scholars and politicians, pointing out that eastern Anatolia was referred to as ?Western Armenia? in Armenia?s declaration of independence in 1990, say Armenia claims parts of Turkey?s territory.

Turkey recognised Armenia in 1991, after the break-up of the Soviet Union of which Armenia was a part, but the two countries did not establish diplomatic relations.

Mr Davutoglu said the border had been recognised as final in the talks under Swiss mediation. ?The recognition of borders is an important element,? he told the NTV news channel.

The protocol on the establishment of diplomatic relations says that both sides had confirmed ?the mutual recognition of the existing border between the two countries as defined by the relevant treaties of international law?.

Relations between the neighbours have been poisoned by both history and regional politics. At the heart of the problems are the massacres of Anatolian Armenians in 1915. Armenia and many international scholars say the Ottoman government of the time ordered the modern world?s first genocide against the Christian minority.

Turkey admits that many innocent people perished, but disputes the number of 1.5 million victims and says the deaths were caused by unrest and wartime conditions that also killed many Muslim Turks.

The protocol on the development of relations says the two countries had agreed to conduct a ?dialogue on the historical dimension?, including ?an impartial scientific examination of the historical records and archives to define existing problems and formulate recommendations?.

In addition to the genocide question, Turkey and Armenia find themselves on opposing sides in the unresolved conflict surrounding Nagorno-Karabakh, an Armenian enclave in Azerbaijan that has been occupied by Armenia.

Turkey, a close ally of Azerbaijan, closed its border in protest against the Armenian action. Since then there have been few contacts. Charter flights between Istanbul and Yerevan only started a few years ago.

Any Turkish government must be careful to avoid the impression that it takes sides against Azerbaijan, a country that many Turks regard as their country?s closest friend. Mr Davutoglu stressed that Turkey will ?protect Azerbaijan?s interests in the course of the normalisation of relations with Armenia?.

That could mean that the Turkish-Armenian border will not be opened soon. Azerbaijan?s foreign ministry warned in a statement quoted by Turkish media yesterday that ?it is against our national interests to open the borders without an end of the occupation of Nagorno-Karabakh?.

The agreement to establish diplomatic relations came almost a year after the president Abdullah Gul became the first Turkish head of state to visit Armenia, thereby starting what has been dubbed a round of ?football diplomacy?. Mr Gul went to Yerevan last September to watch a World Cup qualifying match between the two countries.

The signing of the protocols in October is scheduled to take place two days before the return match in Turkey. It is unclear whether the Armenian president Serge Sarkisian will travel to Turkey for the occasion.

For Turkey, rapprochement with Armenia may strengthen the country?s troubled bid to join the European Union. France, home to a large Armenian community and an EU member strictly opposed to Turkey?s accession, was the first country to welcome Monday?s agreement.

The United States also congratulated the two countries. During a visit to Turkey in April, the US president Barack Obama called on Turkey to normalise its ties with Armenia. The US position matters for Turkey because Ankara fears that an official recognition of the Armenian massacres as genocide by Washington could be a signal for many other countries to do the same.