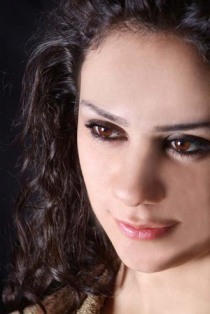 The fusion of Arabic musical traditions with jazz has become an established subgenre slowly gaining popularity among both Egyptian and Arab listeners alike.

The large attendance of Lebanese singer Rima Kcheich?s April concert came as a surprise to many, partially due to the occasional avant-garde aberrations that distinct this fusion. Two consecutive sold-out concerts by singer Lena Chamamyan at Al-Azhar Park?s El-Geneina Theater was another surprise not only to this reviewer but to Chamamyan herself, who was overwhelmed by the warm reception she received in Cairo.

?It?s flattering you know … to get such good feedback from people who are keen on listening to this alternative kind of music,? Chamamyan, whose Egyptian debut was in 2007, said prior to the show.

?It?s like meeting up with an old friend who is dear to you, and them being really excited about seeing you again,? she told Daily News Egypt.

The young Syrian Armenian vocalist enchanted a packed theater with her engaging voice and free-spirited presence on Friday and Saturday as part of Al-Mawred Al-Thaqafy?s Ramadan?s annual program ?Hay.?

Faced with rapid ticket sales and calls from avid fans requesting an additional performance, Al-Mawred extended the show to include a Saturday rerun after it was originally scheduled only for Friday.

Fans swayed to the tunes, others sang along, asking for songs not included in the line-up. The audiences were simply enamored by the music, at instances falling into nostalgia and reliving in past times.

After a fascinating solo entrance epitomized in a Sufi number, Chamamyan sprang to her earlier works, ?Ala Mawj Al-Bahr? (On the Sea Waves) and ?Ya Mayla Al-Ghusson? (Swaying Branches), from her first album ?Hal Asmar Ellon? (My Dark-Skinned Love).

The line-up also included tracks from her second album, ?Shamat,? as well as crowd-pleasing covers of great Egyptian folk composer Sayed Darwish such as ?El Helwa Di Amet Te?gen Fel Fagreya? (The Beauty is Baking in the Morning).

With every song, she journeyed with the viewer through a series of emotions, and used her body language and vocal meanderings to lead such transitions. Her music ranges from Syrian muwashahat and inventive reworking of Andalusian and traditional Armenian tunes to contemporary jazzy love songs infused with Chamamyan?s distinctive oriental touch.

?I feel like I sing Arabic songs in an Armenian way, and this is what makes me different,? said Chamamyan, adding that Armenians are known to express their long harsh history through musical creations, which is why their music usually carries a somber element.

She is yet to perform to Armenian audiences, however. ?There has always been this longing to go to Armenia, so when I do I want to do it right, you know?? Chamamyan said, adding that there might be an Armenian album in the pipelines.

Accompanied by a bassist, a drummer, a keyboardist and Bassel Rajoub, talented saxophonist and partner in the project, Chamamyan transported her audience to different worlds. Throughout the two-hour performance, she accompanied her listeners to Syria, its coasts and its fields, Al-Maghreb (North West of Africa), early 20th century Egypt and, her beloved homeland, Armenia.

It was easy to get lost in her angelic voice. Every once in a while, a strong instrumental solo pierced the air in a harmonious fusion with the carefully constructed ambiance Chamamyan orchestrated with her band members.

Since the inception of the band project in 2006, Chamamyan has performed in several Arab cities as well as Germany, Austria and France. ?Syrian people are very festive and the audience usually very energetic… [while European audiences] listen really well but they are never fully engaged. That?s their nature. They could laugh between the pieces, they could sometimes clap, but that?s about it.?

After the project got on its feet, Chamamyan witnessed a festive couple of years. In 2006, Al-Mawred Al-Thaqafy granted the project a fund to produce their first album which landed them a Monte Carlo award in 2007 that subsequently laid the ground for the next album, ?Shamat,? also produced in 2007, to materialize.

?This prize is what made me think of music as a profession,? said Chamamyan of the grant.

?It is like the first you get from your mother.? The Monte Carlo award, she said, made it easy to flourish as an artist.

Among Chamamyan?s idols is renowned opera singer Maria Callas. ?She transformed classical music from having too many rules to being very simple. She sang very naturally, like it?s effortless,? she said, also citing Ella Fitzgerald as another powerful inspiration.

Chamamyan is planning next to join a music school in Graz, Austria, where she was recently awarded a scholarship by the ministry of culture in Austria. At Graz, she will work with jazz musicians from different parts of the world, with hopes to release an album compiling their collaborative work.

With a voice as commanding as hers and determination to revive traditional music in a new form, Chamamyan is surely on the right track, and we will definitely be seeing her in Egypt again soon.

Newer PostDerHova: My ears are my guidelines
Older PostTurkey and Armenia step towards detente