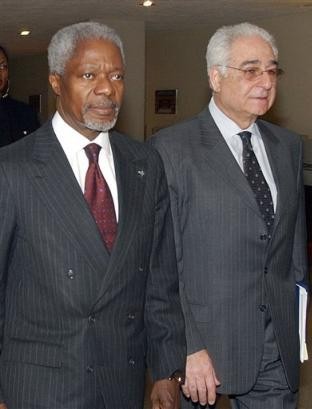 More than a year and a half after Benon Sevan left the to return to his home country, the United States Attorney?s office has decided to use Mr. Sevan as a scapegoat and a distraction from the ? own massive failures and mismanagement in . Mr. Sevan ran a $64 billion program that delivered food, medicine and essential infrastructure to the Iraqi people under nearly impossible conditions. In the nearly four years since Mr. Sevan turned over the program?s assets to the Coalition Provisional Authority, the has done none of these things. Now the United States Government has repackaged the same discredited allegations made by the Volcker Committee – that Mr. Sevan took some $144,000 in cash, funds that he fully reported as family gifts on his UN disclosure form beginning more than seven years ago. These allegations are not only trivial; they are without basis.

Benon Sevan has served the UN for forty years in some of the most difficult assignments in the world?including and as well as , , , , and . Suicide bombers tried to kill him, blowing up his office in and killing his dear friends and colleagues. Mr. Sevan ran the largest humanitarian program in UN history, a program that literally saved tens of thousands of innocent people from death by disease and starvation. Mr. Sevan rebuilt the infrastructure, including the oil fields, that had been devastated by nearly a decade of sanctions. Mr. Sevan confronted both the Iraqis and members of the Security Council without fear or favor. He turned over more than $10 billion to the in 2003, money that has effectively vanished and has not been accounted for since then. Mr. Sevan accounted for every penny of the $64 billion under his control.

It is important to note what the indictment does not charge. This indictment does not charge– because it cannot?that Mr. Sevan ever took any action or failed to take any action other than in the best interests of the Oil – For-Food Programme and the United Nations. Apparently, however, the US Attorney has simply adopted the Volcker Committee?s unfounded conclusions. Mr. Sevan had fully accounted for and reported any payments he received beginning in 1999. The only acts referenced in the indictment by Mr. Sevan are two cash deposits, one of $5,000 in August 2001 and $1,200 in January 2002. Mr. Sevan fully disclosed all of his banking records as well as the fact that, throughout his career travelling for the United Nations, he made and withdrew such sums in cash frequently. The indictment also charges that surcharge payments were made by a certain Mr. Nadler, an acquaintance of Mr. Sevan, to . Mr. Sevan knows nothing about any of Mr. Nadler?s arrangements, but it was Mr. Sevan who brought reports of such surcharges being paid to the Saddam regime to the attention of the Security Council, as the internal UN documentation will substantiate.

It is ludicrous to contend that in 1999 Mr. Sevan disclosed fictitious gifts from his aunt on his forms in anticipation of misleading investigators eight years later. These same baseless allegations were made nearly two years ago, while Mr. Sevan still was working for the UN. No action was taken. Instead the US Government has waited nearly two years to issue a ceremonial charge long after Mr. Sevan?s retirement and return to his home country. There is no doubt that there has been financial fraud and ineptitude by the in on an unprecedented scale, which has significantly contributed to the crisis in . Instead of focusing on the devastating wrongdoing in , the US Government has chosen to focus instead on fully disclosed family gifts from a deceased relative. Mr. Sevan is being used to distract attention from the political and humanitarian disaster in from which the world will not soon recover.

: prosecutors have announced charges against the former head of the United Nations oil-for-food program, accusing him of receiving $160,000 in kickbacks from sales of Iraqi oil under the government of Saddam Hussein.

The seven-count indictment, unsealed Tuesday in U.S. District Court in , was brought against Benon Sevan, 69, a Cypriot who served as executive director of the $64 billion aid program from 1997 until mid-2003. He was accused, together with Ephraim Nadler, 79, a citizen born in , of taking illegal commissions from an Egyptian oil trader in exchange for helping him secure contracts to purchase Iraqi oil. Both were charged with conspiracy and wire fraud.

Sevan has known for some time that he was under federal investigation. The charges echo an Aug. 8, 2005, report by a commission headed by Paul Volcker, a former Federal Reserve chairman, which found that Sevan had profited from illicit transactions with the trader, Fakhry Abdelnour.

The indictment highlights the lingering corruption scandals at the United Nations in the first weeks of the term of a new secretary general, Ban Ki Moon, a South Korean. The Volcker commission concluded that the United Nations needed “thoroughgoing reform” of its management. So far Ban has not made clear whether he intends to carry out sweeping change.

Abdelnour was the president of a small company, African Middle East Petroleum, and the Volcker commission said that Nadler was its treasurer. The indictment describes an August 2001 transaction in which it says Abdelnour arranged to purchase one million barrels of oil from , paying a secret surcharge to Saddam's government. The charges assert that Nadler helped Abdelnour obtain the contract. (Abdelnour appears in the indictment as an unnamed co-conspirator, but was identified in the Volcker report.)

Sevan's lawyer, Eric Lewis, called the allegations “ludicrous.” He said Sevan had received cash payments in that period from an elderly aunt who was giving away her assets. Sevan fully declared the gifts in his UN financial disclosures, Lewis said.

“Whatever arrangement Mr. Nadler had with Mr. Abdelnour, Mr. Sevan had no knowledge,” Lewis said. He said the government was trying to distract attention from “financial fraud and ineptitude by the in on an unprecedented scale.”

The UN program was set up to ease the impact on Iraqi citizens of international sanctions by allowing to sell oil and use the proceeds to purchase food and medicine. Mark Mershon, the assistant director in charge of the FBI's office, said that Sevan's management of the program “was marked by profiteering and profligacy.”

After leaving the program, Sevan remained at the United Nations on a salary of $1 a year while Volcker's investigation was under way. On Aug. 7, 2005, one day before Volcker's report was released, Sevan resigned and moved back to .

Federal prosecutors said they would seek his extradition. If found guilty, he faces a maximum of 50 years in prison. Nadler is also out of the country, but prosecutors did not say where.