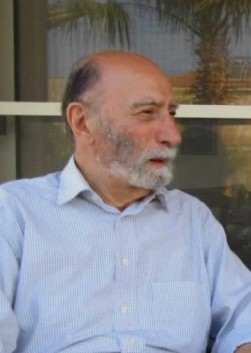 Petition in defence of Western Armenian. Azad-Hye supports the initiative.

Earlier this year Ozinian started a campaign in support of Western Armenian.

Ozinian is originally from Constantinople. He is specialized in Physics, Physical Chemistry and Mathematics. He has also acquired degrees in economics and political sciences.

About the campaign for the defence of Western Armenian, Ozinian provided Azad-Hye the following information:

– The campaign was initiated after attending several conferences related to minority languages in Europe. The Western Armenian language has never been recognized as an official state language but it has been a language in use for long time. It is threatened now because it remains a minority language.

– The most important factor in preserving Western Armenian is the school. Obviously, teachers of Armenian language are the pillars of the institution. The educational work is supported by administrative work. In our traditional schools those who undertake administrative duties (including the principals) are not well prepared.

– The modern Armenian school should be open towards the wider society and remain competitive. We live in a multi-cultural society, a fact that we cannot avoid.

– We had tried to do workshops in Paris for Armenian language teachers. This work needs support from different sides. A school is not a building, it is spirit. Board of trustees of our Armenian schools should well comprehend what school means. It is not what they see rather it is what they do not see, the intangible part, which is difficult to convey. We have also another challenge: to prepare an individual who will be able to live in Armenian and non-Armenian environments alike.

A group of individuals headed by Dr. Vartan Ozinian (based in France) have created an online petition for garnering support for the defence of Western Armenian.

Since the 1915 Genocide the speakers of the Western Armenian have been diminishing in numbers under the threat of what some Armenians describe as “white Genocide”. Western Armenian is nowadays spoken by less than 30% of Diaspora Armenians. It is facing serious problem as many Armenians live in cross-cultural societies and have to compromise on their Armenian traditions.

Eastern Armenian, chosen as the state language by the Republic of Armenia, is neither a regional nor a minority language. Eastern and Western Armenian, their differences aside, both represent a diversity which reinforces the richness of the mosaic of Armenian culture. This state of affairs suggests a natural partnership in the realm of culture between the Eastern and Western communities with two different linguistic expressions since they both are incontestably the constituent parts of the same cultural Armenian mosaic. In practice, this partnership can not function without the mutual respect of the parties regarding the proper value of each other. It should be noted that the development of the respective values exhibited by the Eastern and Western Armenians are due to the different dynamics of their political and social environment. This situation still continues to be the same. That is the fundamental reason why the protection and the development of Western Armenian language should be entrusted to those in countries outside the linguistic influence of the Republic of Armenia in order to avoid linguistic cannibalism due to the amalgamation of the two branches of Armenian.

The petition is available here: http://www.arevmdahayeren.info/

The text of the petition is presented in English, Western Armenian, Spanish and French.

Note: During a vacation in Cyprus Dr. Vartan Ozinian was interviewed by Yeran Kouyoumdjian of Azad Khosk electronic magazine. Read the interview in Armenian here.