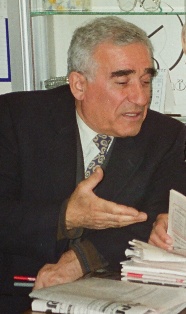 Dr. Toros Toranian, you are well known in the Diaspora for your countless publications and now that your books have already superseded number two hundred, how can you describe that path for us?

My journey with books started when I was a fourth grader in the Aleppo Gulbenkian school; During our classes, I used to read books which were not relevant to the school curriculum. The teachers often saw the book and confiscated it; I also wrote poetry in the elementary classes. We had a teacher (Vartan Yeramian) who once reproached me saying: ?Am I here to correct your poems? Pay more attention to your classes?. And so, for a period, I was mad at him and stopped writing, but continued after graduation in the 1940s and never stopped.

I published my first book in 1960, a collection of poems titled ?Asdgheru Jampan? (?The Stars? Path?). Tens of books followed the first one. After I had my degree in medicine and started to work, I dedicated all my earnings to publishing my, my acquaintances? and other people?s books. I can proudly say that I helped publish around 200 books. I was always thrilled since I was helping a good book see the light.

You make it sound so easy but I?m sure it is not. What?s the most challenging part?

Circulating for sure; Circulating the Armenian book has always been difficult, but that has never kept me from dedicating all my money and time to serving it.

Now that I am a retired doctor, I try to find and encourage others to sponsor a book. I find great pleasure in helping to bring a book to life. Believe it or not, in a city like Aleppo, it is really difficult to distribute 100 copies of any book, even if the price is affordable. For me it is not considered as selling a book, rather it is introducing St. Mesrob Mashdots to their households. If my target was financial, I would have kept working as an anesthetist.

Some of your books include memoirs of your journeys all around the world, what kind of a reaction do they have when they are read in the countries mentioned in the stories?

I have been to every single country where there is an Armenian community, from Australia to Europe to USA and wherever I went, I looked for Armenians and found them, and wrote about them.

We are an amazing people, we go to a foreign land, where we do not speak the language, yet after a few years we have a successful business there. I can go on and on about the achievements the Armenians had wherever they went.

For example, before England even knew about India or Hong Kong, there were Armenians there who built churches, they built the harbor there and today there are still streets named after them. In the castle in Macau  there was a  grave with  an Armenian gravestone, the man must have been an important figure, otherwise why would he be buried there? In 2005 it was the 170th anniversary of the Singapore Armenian church? what can I say? we construct something wherever we go?

What about the Armenians in Syria, how are they relating to the Arabs there?

I can proudly say that the Armenians in Syria have been so active, in the last 20 years the Hamazkayin and the AGBU in Aleppo have published many books about the Armenian Genocide translated into Arabic, of course we do not want the world to know us mainly because of Genocide, we have to introduce our literature to them as well, the Armenian poetry is like any other international poetry, then when we translate these, others will know that we Armenians are not only diamond cutters, but we have diamond-like poetry. The only way to meet and genuinely know us is through translated books.

We have all the reasons to be proud of our architects, scientists, musicians and literary men. This is not a subjective view, many Austrian and Italian architects have praised and wrote books on the Armenian architecture.

St. Peter Church was built according to the outline of an Armenian church, the artist Rafaello and the Pope agreed to build the church based on the outline of the Armenian Pakaran Church (near lake Van).

We have always been destroyed but we keep on building and constructing anywhere we go?

In the Soviet Union only two nations could go to explore the cosmos, the Russians and the Armenians, the latter could do that because of a great scientist like Krikor Kurzadian. Not many know that Armenians have been able to construct a space ship all these years ago. He has been invited to stay and help other scientists in China and Ukraine, but of course he refused to work anywhere else except for Armenia.

We are afraid of globalization but since we know English, we can introduce our literature and culture to the entire world. We don?t want the world to remember us merely through our tragedies, we want them to know about our architecture our churches, our national songs and uniforms, our artists, scientists and athletes?. The world must know what we are able to do.

Avedis Qasabian a community figure in Australia wrote the following on the occasion of Dr. Toranian's visit to Sydney in 2004:

“His friendly and magnetic personality captures his audience from the first instant and you get the feeling that you don?t want it to ever end. He is warm and sincere, and full of energy. Even though, he is 77 years young, he has an extraordinary mind, sharp and witty. He has made great contribution to Armenian literature in general. He has, in addition to translating many works of other authors, written more than 70 books, and he is still writing. He is incurably Armenian, in fact his patriotism oozes out of him, he is Armenian to his bootlace, his personality is infectious and makes you feel proud of your heritage and proud to be an Armenian. In short he has been an inspiration to all of us. His contribution to Armenia and Armenian communities in the Diaspora have been invaluable. During his visit he made a stop at all the Armenian Schools and Churches and the various political and cultural organization without prejudice. His motto is to love everything that is Armenian irrespective of your religious or political affiliation, and he is convinced that loving each other as Armenians is the greatest weapon against our enemies who would like to see us disappear from the face of this Earth”.