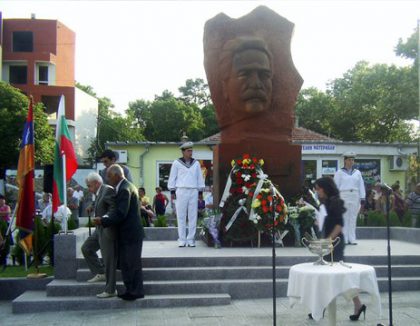 A statue of Armenian national hero General Andranik was unveiled in the seaside city of Varna, Bulgaria, in the presence of Bulgarian government officials, public and political personalities and leaders of the Union of Armenians of Bulgaria.

The 6-meter long statue is located in a park renamed after General Andranik in the Galata district of the city, where General Andranik lived before the outbreak of World War I and after taking part in the Balkan Wars of 1912-1913 side-by-side with the Bulgarians against the Ottomans. Bulgarians honoured him by the “Cross of Bravery”.

The ceremony was attended by hundreds of local Armenians from Varna and other Bulgarian cities. Present was also the General's grandson Vardan Nranyan.

Turkey opposed to the erection of the statue of the Armenian national hero, but the Bulgarian authorities did not yield to the pressure.

Andranik Ozanian or commonly known as General Andranik was born in Shabin Karahisar (currently Sebinkarahisar) in 1865 and died at the age of 62 in Fresno, California on August 31, 1927. He was greatly admired by Armenians as a national hero. There are many statues dedicated to Andranik, including one in front of the Saint Gregory Cathedral in Yerevan.