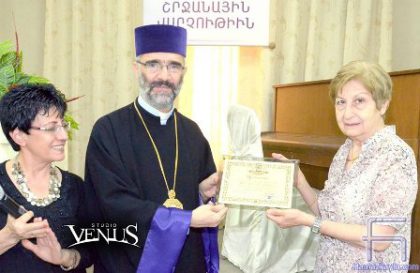 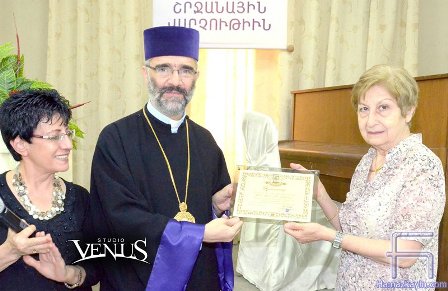 The 20th Representative Meeting of Hamazkayin in Syria took place on Sunday, August 7, 2011, at 11:00 AM, at the Levon Shant Hall of Aram Manoogian People?s Home.

Representatives of the N. Aghpalian Committee in Aleppo, Hamo Ohanjanian Committee in Kessab, Avedis Aharonian Committee in Kamishli, the Institute of Armenian Studies, the Zvartnots Choir, theater and Parsegh Ganachian Music College units, as well as members of the Regional Committee and Regional subcommittees of Hamazkayin, the Armenian Red Cross in Syria, and Armenian General Sports Unions (HMEM) all attended the meeting.

Hrip Gananian, the chairperson of the Regional Committee, welcomed the meeting participants and invited them to stand up in the memory of recently deceased members of Hamazkayin. Afterward she declared the meeting open and wished the members success. She added that with successive Regional Committees, Hamazkayin in Syria is the educational and cultural axis that will continue to offer high quality culture and maintain the strong Armenia-diaspora bond.

Garo Youzbashian said Hamazkayin is one of the most essential organizations in the diaspora?s cultural life. As a diasporan institution, Hamazkayin represents the cultural features of the Armenian community in Syria.

Afterward Bishop Shahan Sarkissian, the Primate of the diocese, delivered his heartfelt words and blessings. He spoke about Hamazkayin?s wide cultural mission and recommended adjusting obsolete approaches to the new perceptions of younger generations, bearing in mind that Hamazkayin has a responsibility to include all layers of the Armenian nation.

The Regional Committee of Hamazkayin had decided to honor Fimi Der Hagopian, the manager of the Institute of Armenian Studies. Therefore, the Primate handed her a special letter of appreciation.

The participants listened to the report of the two ?year activities of the expired Regional Committee and presented their suggestions for the next term.

Afterward, the committees elected by the meeting read their reports and evaluations. Then the meeting discussed its blueprints and elected a new Regional Committee with the following members:

The meeting completed its agenda at 8:00 PM.