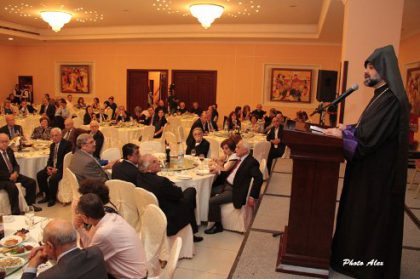 Archbishop Kegham Khacherian, Primate of the Armenian Apostolic Diocese of Lebanon, resigned from his post after serving 18 years. His resignation (tendered a month ago) was accepted on 02 October 2013 and published on the next day in the local Armenian “Aztag” daily, without mentioning any reasons or details.

On 6th October 2013 Archbishop Kegham Khacherian officiated for the last time Holy Liturgy in his capacity as head of the church in Lebanon.

During his farewell sermon he said “whoever acts rightfully gets closer to the light, demonstrating that his work is according to the God's will”. Every day we live a struggle between light and darkness, he said, adding that “we will try always to be one of those who act in light, because those who act in darkness are wrongful… The Gospel is the truth that distinguishes light from darkness…”, he emphasized, thanking God that he was given the strength throughout 18 years to act in accordance to the wish of the people.

He ended his sermon calling upon the people to remain faithful. “Our national treasure is our people. Keep family, church, school and moral values”, he concluded.

On 4th October 2013 a farewell gathering in the Prelacy's hall in Bourdj Hammoud, Beirut, marked the departure of the Archbishop from his post.

It is not clear what had triggered the sudden resignation of Archbishop Khacherian. Rumors say that it is the result of personality clash with the Catholicos Aram I. Archbishop was offered the Prelacy of UAE and Qatar, where he has close relatives, but he did not accept it.

On Social Media the news of the sudden and unexplained resignation was not well received. Ani Panossian Mouradian (USA) said “if no clear explanations are given, people will continue to do all kind of speculations”. Hrach Kalsahakian (UAE) mentioned that “recently we have been hearing a lot about transparency in the church. It is our wish that such calls are translated into reality”.

Arax weekly of Tehran said “extreme fatigue” was mentioned as the reason for the resignation. However, this is difficult to believe, because the Archbishop is only 51 years old and has not been showing any signs for exhaustion.

Araxie Pilavjian Khederlarian (Lebanon) on the other hand sees that “The Prelacy has no obligation at all to be extra-transparent or to make announcements about its decisions”. Hovig Trtrian (Syria) admits that he “still believes Prelacy related sensitive issues should not be publicly discussed and should not lead to assumptions”. Yeran Kouyoumdjian (Cyprus) said that the news of the resignation “were shocking. It is our right to ask for explanation. The church should be transparent, otherwise it would lose its credibility”, she added. George Ambardjian (Lebanon) underlined that “there are many issues in the church in need of reviewing. Not everything said is true, but the Armenian Church should renovate itself and first of all it should address the public”.

New Primate was elected Bishop Shahe Panossian, originally from Kessab, Syria, who was serving until recently as the Catholicosal Vicar in the Prelacy of Kuwait and Arabian Gulf Countries.

Newer PostOfficial visits of Hamazkayin members in New York
Older PostLevon Muradyan: The word THEATRE is inscribed on my forehead