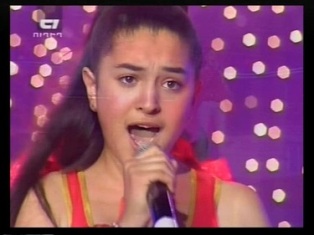 Monica Manucharova has an exceptionally beautiful and mature voice which is rarely seen in a twelve year old girl. The Armenian contest to determine the best junior voice that will represent the country in Junior Eurovision 2008 in Cyprus was held in several stages. The final round was yesterday and Monical Manucharova became the winner.

She came with her mother Gyumri and spend the first couple of nights in the train station because of not having relatives in the capital Yerevan and not being able to afford a hotel room in Yerevan. Few days later, as Manucharova's talent made her to stand out from the other contestants she was noticed and one of the workers of the Armenian TV Radio took Monica and her mother to her house until she could complete the contest. Otherwise they were going to spend the rest of the nights in the train station, reports the Armenian Radio.

In Gyumri too Monica Manucharova's family does not have an apartment and they live with her uncle in his house. However, she held such a wonderful pride in representing her city Gyumri in the national contest to determine the representative that will present Armenia in Junior Eurovision.

We have heard the United States being a country of opportunity where a homeless talented person can become a movie start or an overnight celebrity. Now it's cool to see another, a rather small country Armenia where a homeless girl can come from a province, spend the night in the train station, but win the national contest and become an overnight celebrity, earnings even the foreign media's attention.

Our congradulations to Monica Manucharova who not only won the national contest of the Armenian Junior Eurovision 2008, but also became a source of inspiration to millions of young and disadvantages people around the world.

Note: Monika Manucharova, 12, will represent Armenia in this year Junior Eurovision which will take place on 22 November 2008, in Limassol, Cyprus, with her song “Im ergi hnchuny” (”Sounds of my song”).