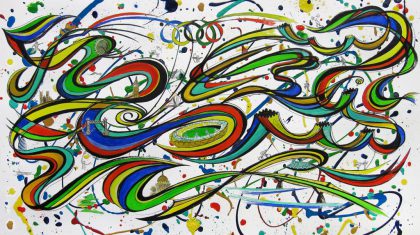 
Lena Kelekian and Hagop Sulahian have received confirmation that their artworks are selected by the International Jury of OFA (Olympic Fine Arts), the organizers of the Olympic Fine Arts exhibition that will take place in the Barbican in London from 01-30 August 2012, during the Olympic Games of London this summer.

They will be representing Lebanon with their artwork and are invited to attend the opening ceremony on the 1st of August and to receive the Olympic Fine Arts Gold medals.

The theme of this year's exhibition is: “The Great Wall Embraces the River Thames”

Lena Kelekian's artwork depicts the Great Wall of China on the right side of the painting uniting with the meandering river Thames that pays tribute along its course to all the landmarks of London. The river and the wall embrace each other in a swirling motion around the main Olympic stadium. The entire painting is dotted with small images of the different Olympic disciplines.

Looking at Hagop Sulahian's artwork at a close distance one will only see an explosion of colors flying in all directions emulating the diversity and dynamism of the Olympic games. It is only when you step back from the artwork at a considerable distance that you will begin to see within this seemingly chaotic display the perfectly rounded interlocking Olympic rings.

Newer PostHamlet Ghushchyan: Founder and Rector of the Academy of Radio and Television in Armenia
Older PostArmenian chapel will be Stockholm's 192nd historic building