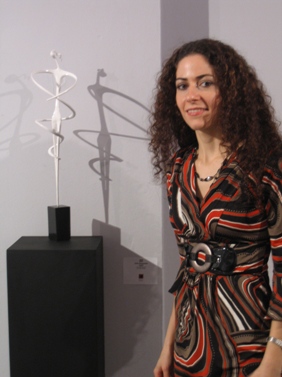 A creative arts centre in the Musaffah industrial zone is expected to ease the capital?s shortage of cheap studio space for emerging artists.

Groundwork has already begun on the 650-square-metre warehouse dubbed the Art Hub, which is due to open next year and is the brainchild of Tini Meyer.

An artist of German and Spanish descent who paints and experiments with conceptual art, Ms Meyer, 26, said the site would accommodate dozens of musicians, calligraphers, sculptors, jewellers, painters, designers and more.

It would mirror a similar initiative in the Al Quoz industrial area of Dubai, in which galleries have sprung up next to factories and in converted warehouses.

?I want to turn Art Hub into somewhere that artists will be proud to work,? Ms Myer said. ?We are trying to create a platform for artists.?

A major challenge in the city, she noted, was for artists to find quality studio space at low rents.

?A studio is a workshop, but it is also a strong selling point,? she said.

Musaffah is only a 10-minute drive from the bridges off the island, and ?people who want to buy art will make the effort if they know they are going to find a dozen or so artists all producing their works on site?.

Linda Stephanian, 28, an Armenian-Iranian sculptress and the manager of the Ghaf Art Gallery, has been waiting for something like the Art Hub since her arrival in Abu Dhabi in 2006.

Most of her artist friends, she said, were forced to make room to work in their homes. Ms Stephanian works with air-hardening clay and papier-m?ch? in her kitchen and says the restricted space limits the scale of her creations.

?My works are mostly small because of the space. If I have bigger space, I?ll go for bigger sculptures.?

Ms Stephanian has looked for space in Musaffah before, but could not find anything smaller than a whole warehouse.

?I couldn?t find a small space, but if [Art Hub] is affordable, I would definitely be looking for a studio there,? she said. ?I think it will be really well accepted here since I know maybe eight or 10 artists here who can?t find affordable studio space to rent.?