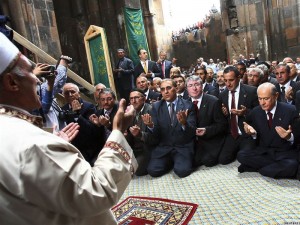 Armenia's Apostolic Church on Saturday condemned a ceremony where hundreds of Turkish nationalists held prayers at the ruins of an ancient Armenian cathedral in eastern Turkey.

The ceremony on Friday, organized by the Nationalist Action Party (MHP), Turkey's second largest opposition force, was widely seen as a response to a landmark service that Armenians held last month in the same region.

“We learned with indignation that, with permission from Turkish authorities, members of the Nationalist Action Party organized Muslim prayers at the Armenian Christian church in Ani,” the Holy See of Etchmiadzin, the seat of the Armenian church, said in a statement.

“This step was a political provocation that bears no relation to spiritual feelings or to religious freedom or rights,” it said.

“The Holy Etchmiadzin condemns such actions, which sow intolerance and hatred towards Armenians.”

Tensions between Turkey and Armenia have risen after a landmark deal signed last year to establish diplomatic ties and reopen their border fell apart amid lingering mistrust. Armenia announced in April it had halted the ratification process of the deal.

Friday's ceremony was held at the decaying 11th-century cathedral at Ani, an uninhabited archaeological site, which was once the capital of a medieval Armenian kingdom, in the province of Kars, at the Armenian border.

The ceremony followed a landmark September 19 service at a historic Armenian church in Van province, which Ankara opened to prayers in a gesture of good will, hoping to defuse tensions in the troubled peace efforts with Armenia. The government had hailed that service as a sign of growing religious tolerance in the predominantly Muslim country as it seeks membership of the European Union.

The Armenian church also boycotted that ceremony after Turkey's failure to install a cross on the church dome sparked Armenian criticism that the mass was a Turkish publicity stunt.

Following the church service, the opposition Nationalist Movement Party (MHP) obtained permission from the Culture Ministry to hold prayers in the Cathedral converted into a mosque by Seljuk Sultan Alp Arslan when he conquered the region in 1064.

“I think it is important to at least remember the mosque where Sultan Alp Arslan prayed when he entered these lands,” MHP Kars deputy Gurcan
Dagdas told a Turkish broadcaster this week.