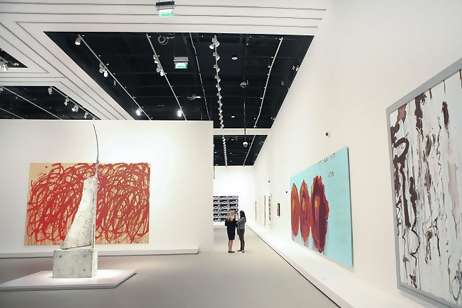 
There is a handful of names, a mere mention of which is enough to describe an industry. In film there is Harvey Weinstein. In Formula One there is Bernie Ecclestone. And in art, specifically the shark-infested world of dealing, there is Larry Gagosian; the Armenian-American who started out selling framed posters near his alma mater, UCLA, in the 1970s and now presides over a gallery empire that spreads from New York to Los Angeles, London, Rome, Paris and Athens.

His stable of artists includes some of the most notable names of the past 50 years, including Willem de Kooning, Andy Warhol, Jasper Johns and Jeff Koons. And he has, not just once but several times, been involved in some of the highest bids ever made at auction. For all his style and swagger (the steely gray hair and sharp suits have become his trademark), Gagosian is resolutely publicity-shy, rarely granting interviews and refusing to indulge the rumour mill that inevitably swirls around someone of his stature. Now, though, thanks to a ground-breaking new exhibition at Manarat al Saadiyat in Abu Dhabi, which shows, for the first time, part of his private collection, the public will be allowed a glimpse of the man behind the dealer.

It is the second to take place at the still paint-fresh Manarat al Saadiyat, the cavernous exhibition space opened almost a year ago to provide a cultural focal point on the site of what will, by 2013, house three world-class museums. The show, organised by the Tourism Development and Investment Company and curated by Anne Baldassari, the director and chairman of the Picasso National Museum in Paris, features works by six giants of the American post-war era. Robert Rauschenberg, Ed Ruscha, Richard Serra, Cy Twombly, Andy Warhol and Christopher Wool and is called, after their initials, RSTW . It is, Baldassari says, only a tiny part of Gagosian's entire private collection, but one that is packed with important, formative and often iconic pieces.

“There are 72 works here,” says Baldassari (who also curated both the Picasso and Emirati Expressions exhibitions at the Emirates Palace in 2008 and 2009), “which is nothing considering the total size of his collections. Obviously we wanted to bring a lot more, but, as with any museum, we were limited by the amount of space.” The works, which include paintings, photography, installations, sculptures, drawings and moving images, are spread between five rooms. How, when faced with a disc sent by Gagosian holding around 1,000 images, did Baldassari go about choosing which to exhibit? “Firstly,” she says, “RSTW is part of the Roman alphabetic order and it was a more objective way to start investigation of the Larry Gagosian collection.”

Letters from the end of the alphabet were chosen, she says, because Arabic is read from right to left. As well as their influential role in post-war 20th-century art, all of the artists have links with Gagosian himself. “They are all,” Baldassar says, “like Larry, artists from families who emigrated from Europe. They were not immersed in American culture; they were discovering it through advertising signs, commercial posters and text.” Likewise, there is also a link to the place in which the exhibition is set. “All of them have been closely linked to the West Coast creation in the US,” she says. “Gagosian is from LA, Rauschenberg has been living in LA for most of his life and Warhol is a kind of Hollywood star.

The West Coast was, at the time, in creation – the US was built from east to west in a lateral passage – and this desert and the American creation of the landscape links closely to Abu Dhabi. At the moment Abu Dhabi is also creating a new landscape, so there is a ­parallel.” Baldassari's intention was, she says, to present the works as objectively as possible so that visitors could construct their own narratives. “It was a way – I think a serious way – to be simultaneously open, rich, specific and respectful of the works of each of the artists.” The exhibition is accessed through R, a room that features four huge Rauschenberg works and 19 Ruschas. “Obviously all the artists in the R section of Larry's collection are not represented,” she says.

“I deliberately chose these two artists because the project was to create a didactic show and in my opinion they were the most important.” All but one of the Rauschenbergs from Gagosian's collection are exhibited here, the only space in the exhibition that is shared between two artists. “Because Rauschenberg is not so richly represented in Gagosian's collection, I wanted to create a confrontation with another artist,” she says. Certainly, the contrast between Ruscha's neat, painted wordplays and Rauschenberg's huge collages and installations is an intriguing one. Serra's bleak, imposing metal sculptures occupy the second room. Gagosian has, according to Baldassari, some monumental examples of the artist's work, but it was logistically impossible to bring them (bearing in mind that one of his steel sculptures takes up much of the largest gallery at the Guggengheim Bilbao, it is not hard to see why). From there, it is on to Cy Twombly's awe-inspiring explosions of colour, which line the walls of the third gallery.

“American artists introduced the idea of dimension for the first time,” Baldassari says, “so it was very important to include that.” Recent examples of Twombly's majestic, dripping canvases are shown, as well as examples of his early works, and two bronze sculptures. Inevitably, the most eagerly-awaited room will be that dedicated to Andy Warhol, a space likely to give you goose-bumps; not only because it houses several of the artist's most iconic images, but also because it provides such a clear insight into the artist's pysche. “His whole career is represented,” Baldassari says. “There are some from 1962, his first show, right up until the last. We can follow his fascination with death, accidents and executions, as well as his preoccupation with the idea of fame.” Images of horrific car crashes printed on linen, as well as Most Wanted Man No 7 (1964), featuring two blank-faced mugshots, jostle with his better-known printed portraits of Marilyn Monroe, Elvis Presley and Mao Zedong. Finally, occupying an entire wall is his Sixty Last Suppers, (1986), his (intentionally) crude printed appropriation of Leonardo Da Vinci's painting. It was, significantly, his last work, completed shortly before his death in 1987. “Warhol is a star today,” Baldassari says, “but he made objects, not just images, and it's important to be in physical relation to them.”

The show is rounded off with Wool, “the child of this story”. His journey from textual abstraction of the kind used by de Kooning, Rauschenberg and Twombly to the creation of his own unique style, using photographs of his own paintings as a base on which to work again, is also cleverly depicted in a chronological sequence. It is, in its entirety, a breathtakingly expansive, yet cleverly segued collection of works, the likes of which are unlikely to be seen together again any time soon. Despite many of the works' iconic status, it was important, Baldassari says, to let them speak for themselves. “The concept I have of an exhibition is not to exhibit artworks, but to allow people to be exhibited to in a very simple way.”

With the galleries' plain white walls and neutral carpets and lighting, it is certainly that. Like Gagosian himself, Baldassari says, she likes the works to be exhibited in an abstract space. “I respect that,” she says, “and I have worked like that too.” So what of Gagosian the man? How does this collection reflect him? On this Baldassari is more vague. “Larry's collection consists of very important artists, the principal artists of the second half of the 20th century,” she says. “To build something like that, of museum quality, is incredible. But the discussion is with and through the works. It's not a kind of psychoanalysis of Gagosian, about his choices, his investments, his engagement. You have to have that discussion with him. My discussion is with the artistry.”

She does concede, however, that the great man has an inevitable presence. “Obviously he is part of the story, in the background. All these works are here because of him, so maybe if it's so rich and interesting, it's because of their relation to him.” Enticingly, there are more of these slightly off-centre exhibitions to come, says Rita Aoun Abdo, the director of the cultural department at the TDIC. “This is really our approach in Abu Dhabi, to go beyond what is shown, what is clich?d and to explore more,” she says. “We want people to know that the museums of Saadiyat Island will not simply be replicas of what's happening elsewhere, but will shed light on new aspects. “Here, we have approached someone who is known in the art world as a dealer, linked to very commercial practices. And here is this amazing private collection – something that is really intimate – that also narrates the story of contemporary art.”

RSTW is at the Manarat al Saadiyat, Saadiyat Island, Abu Dhabi, until 24 January 2010.

Photo: Visitors to the Manarat al Saadiyat view works of art from Larry Gagosian's private collection, the first time the public has had such a chance (Photo by Delores Johnson / The National)

1) Saadiyat secures world art first
By Rym Ghazal
Some of the defining images of the 20th century, including one of Andy Warhol's famous multicolour prints of Marilyn Monroe, go on display in the capital.
Source: The National, 22 September 2010
http://www.thenational.ae/news/uae-news/saadiyat-secures-world-art-first

2) Gagosian's art of the art deal
By Faisal al Yafai
The curator is arguably the most powerful man in the art world, and some of his collection goes on display next month in the capital.
Source: The National, 04 September 2010
http://www.thenational.ae/news/gagosians-art-of-the-art-deal