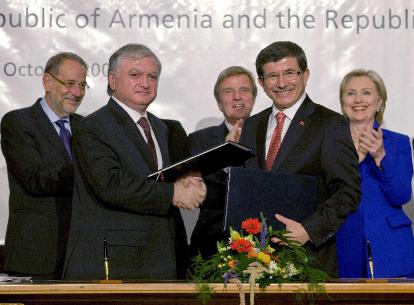 Last year on Oct. 10 in Zurich, after intensive negotiations, Armenia and Turkey reached agreement and the foreign ministers of the two countries signed the protocols on the establishment of diplomatic relations, opening of the border and development of bilateral relations.

The Armenian-Turkish relations were in a deadlock when President Serzh Sargsyan initiated the normalization process with Turkey. We in Armenia were guided by a vision of a future in which generations would live in peace and safety. This Armenian initiative met a positive response by the Turkish President and allowed us to make a confident investment in a durable rapprochement.

Our position was reflected in the well-known approach of normalization of relations without any preconditions. It was the bottom-line principle for starting the negotiations with Turkey. With this common understanding we started, conducted this process and came to the agreements. From the beginning of the process up until now this approach has been shared by the whole international community?starting from the Swiss mediators to the secretary-general of the U.N., the OSCE, the EU, the U.S., Russia, France and many other countries.

Unfortunately Turkey has backtracked from the agreements. Not only has it refrained from ratifying the protocols, but Ankara has returned to the language of preconditions that it had used before the beginning of the process.

It seems we speak in different languages. On the one hand, the Turkish leaders pretend that they always respect the principle of pacta sunt servanda (agreements must be kept), but on the other hand, they refrain from ratifying and implementing the agreements signed by themselves in Zurich. What does that mean? They claim they have no preconditions, that they simply demand that we fulfill this or that before they can proceed with the ratification. Does this mean they have no preconditions?

Turkey pretends that all problems in the region must have a “comprehensive solution” once and for all. This is a beautiful phrase, but how realistic is it? It is a mere rhetoric, all words and no performance.

Hypocritically Turkey also uses the normalization process as a smokescreen for baseless argument that the adoption of resolutions on the Armenian Genocide in various countries can damage the normalization process. Yet, from the beginning of the process we made clear both in our contacts with the Turkish partners as well as publicly that Armenia will never put under question the fact of the Armenian Genocide or the importance of its international recognition.

True reconciliation does not consist of forgetting the past or feeding younger generations tales of denial. Despite the fact that for 95 years Turkey has been continuously denying the Armenian Genocide, the Armenian side did not require its recognition by Turkey as a precondition for the normalization of the relations. Paradoxically it is Turkey that directly or indirectly has attempted to manipulate that issue, making it a precondition.

Armenia initiated that process and spared no effort to see it succeed. When the Turkish side was pushing the whole process into a stalemate, Armenia was obliged to suspend its own ratification procedure. Yet it remained in the normalization process, which was met with understanding and welcomed by world leaders.

The negotiations between Armenia and Turkey were finalized by the signature of the protocols. There is neither “silent diplomacy, nor “a second season” of Zurich, nor any new round of negotiations, according to the information often spread by the Turkish media these days. The only remaining step in this long lasting process is the ratification and implementation of the Armenian-Turkish protocols without further ado. Armenia will be ready to move forward if Turkey is again ready to go ahead with the normalization process without preconditions.

Today various world capitals recall that the ball is in the Turkish court, that Armenia has done its part and that Turkey should take the steps that it promised to take.

One needs to prove one's good intentions by deeds.

*Mr. Nalbandian is Minister of Foreign Affairs of Armenia

Armenia resentful one year after signing accord with Turkey

Armenian Foreign Ministry officials have blamed Turkey for failing to bring into effect protocols that were signed a year ago, as the Turkish-Armenian border is still closed and the Nagorno-Karabakh issue remains a source of friction.

“A political battle continues between Turkey and Armenia. The U.S., the European Union and Russia made promises to Armenia, but betrayed us. The protocols are a political fiasco from the Armenian viewpoint,” Levon Zurabian, a key figure of the Armenian National Congress, told the H?rriyet Daily News & Economic Review in a recent interview.

The Armenian Foreign Ministry says it holds Turkey responsible for the protocols having not yet come into force while Armenia remains ready for dialogue without precondition. Armenian President Serge Sarkisian also announced in April a unilateral freeze of the protocols because Turkey had not delivered what it promised.

Excitement for reconciliation between the countries peaked a year ago when Turkey and Armenia signed historic protocols to begin working toward opening the border and re-establishing official relations. The signing ceremony, however, was tense and required international mediators to broker a last-minute deal.

Zubarian told the Daily News in a recent interview that the political battle continues between Turkey and Armenia, adding that the protocols add tension to bilateral relations instead of easing them. “Both sides accuse each other of not actualizing the protocols. Both sides are trying to put the blame on each other.”

Zubarian criticized the Sarkisian administration, the U.S., the EU and Russia, saying Armenia was deceived. “Armenia made concessions on the protocols. Turkey wanted to prevent the U.S. congress from recognizing the Armenian genocide and they?ve managed it through the protocols. The protocols are a political fiasco from Armenia?s viewpoint.”

“There could?ve been no Karabakh issue”

Turkey unilaterally closed the Turkish-Armenian borders in 1993 as a response to the Nagarno-Karabakh conflict between Armenia and Azerbaijan and bilateral relations nearly froze.

Although not included in the protocols, Turkey ties the solution of the Nagorno-Karabakh conflict to the re-opening of the borders. Western officials continue shuttle diplomacy between Armenia and Azerbaijan to settle the Nagorno-Karabakh issue, but so far no progress has been made.

While encounters take place sometimes on both sides, Zubarian claimed that if Turkey had considered the offers made by the Levon Der Bedrosian government in the 1990s there might be no Karabakh question today. “Der Bedrosian had asked for the launch of bilateral relations unconditionally. Turkey, however, rejected the olive branch. If steps had been taken in those days, we wouldn?t be in today?s situation and would have overcome the crisis with Azerbaijan,” he said.

“?La?in is of political importance”

Armenian political experts are mostly of the opinion the protocols cannot be brought into effect, Zubarian said, adding that he believed Turkey would never ignore the interests of Azerbaijan.

“Turkey will not re-open borders without reaching a final solution in Nagorno-Karabakh,” he said. “The Karabakh administration and Azerbaijan should immediately start direct dialogue. This is the only solution. Otherwise, it is impossible to solve the problem.”

Zubarian said handing over the La?in Corridor to Azerbaijan would be impossible. “Surrendering La?in will create a strategic risk not only for Nagorno Karabakh, but also for Armenia. Such a risk cannot be taken.”