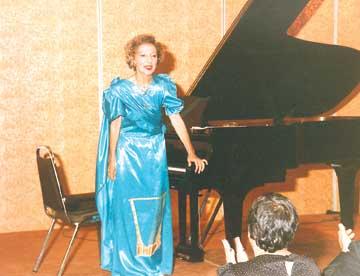 Beatrice Ohanessian, was born March 15, 1927 in Baghdad, Iraq, where she received her early training in music at the Institute of Fine Arts.

She graduated with special mention as a piano major and was invited to assist her Rumanian piano professor that same year.

An Iraqi Government Scholarship allowed her to continue her studies at the Royal Academy of Music in London with Professor Max Pirani.

She majored in piano and took voice as a second major.

After some teaching she was granted a Fullbright Scholarship to continue her higher training at the Juilliard School of Music in New York City where she studied in piano.

Her debut at Carnegie Recital Hall was followed by a series of concerts in the United States after which she returned to Iraq where she was appointed head of the piano department at the Institute of Fine Arts.

In 1969-72 she was invited to teach at the University of Minnesota and simultaneously at Macalester College. This was followed by two years of teaching and performing in Geneva and touring as a soloist throughout Switzerland.

Miss Ohanessian has concertized extensively in all countries of Central Europe as well as Eastern Europe, the Soviet Countries, Scandinavian Countries, Finland and the Middle East as an Iraqi representative artist. She has been a regular soloist with the Iraqi Symphony Orchestra and other orchestras including the Minneapolis Symphony Orchestra.

Sponsored by the Geothe Institute, she was a regular recitalist in Germany and Vienna.

Since 1995 until recently, Miss Ohanessian has been teaching at the University of Minnesota and at Macalester College as well as performing.

She has written compositions of her own. These compositions have been orchestrated and performed at the annual International Festival in Babylon, Iraq.

Miss Ohanessian has had a major influence and been instrumental in enhancing and influencing Western Classical music in Iraq.

Her collaboration with Western Cultural Centers has been very significant. The Ministry of Culture and Information in Baghdad and the Artists' Union has honored Beatrice as a pioneer and first concert Artist in Iraq and she is considered a national treasure of Iraq.

Her musical programs with compositions by Alan Hovaness are being displayed at the Charents Museum in Yerevan, Armenia.

She is survived by her devoted sister, Sita Ohanessian and also by a cousin, Vartan Ohanessian.

She was preceded in death by her beloved brother, Arsham Ohanessian, his wife, Charlotte (Aghajaniam) Ohanessian; and by her parents, Ohaness Ohanessian and Serpouhi Ohanessian.

Following are some comments left in the obituary's guestbook:

I had the honor to know her during my work in The Baghdad Observer during the 1980s. I had wrote about her concerts and had interviewed her several times. I used to visit her in her house in Baghdad. Sometimes I would be the only guest as she would sit to the piano and play some of the pieces of her next concert. She was keen on reviewing everything before being published, a tendency that not all publications agree to do. But with Beatrice Ohanessian it was different. Due to her reputation, the people in the Observer agreed that she knows the final shape of the article. Despite her fame, her outstanding talent, she was a very nice person, so easy to deal with. During talking with her, she would never let you feel that your are a stranger.
Hana Toma

Such a great loss of a colleague, friend and an inspired musician. Beatrice may you rest in peace and rest assured of your being remembered by all who enjoyed your music back home and abroad. To the family my deepest condolences.
Ghazi Mustafa Bahjet

Sad loss! A great Iraqi artist and a pillar in music. No doubt the history books of Iraqi music will immortalise this awesome personality. I was in the University of Mosul when she did a concert at Nineveh Oberoi in the late 1980s. I was lucky enough to sit only few meters away from her and watch her fingers touch the piano; I was thrilled, touched, and couldn?t take my eyes away. I simply witnessed and experienced everlasting moments of magic!
Mazin Adwar Salim

What a great lost for Iraq and Iraqi artists. I cant forget her humble personality when she was the pianist of the Iraqi National Orchestra, and how she used to talk to every body with very simple and modest way despite who she was.
Nahla Elias Jojo

It was a great Honor to know my teacher then my friend Beatrice Ohanessian. My Condolences to her family, specially to my dear Seta, and to all the musicians who worked with her, she was one of the great musical pioneers in Iraq, and one day she will have her right place in the Iraqi history of music.
Laman Bakri

Another great loss for Iraq. Beatrice was a guiding light for all aspiring Iraqi talent during her career. It was a pleasure to know her. She will be greatly missed by all her fans.
Raad Draz

We were sadden by this lose; Beatrice Ohanessian was a pillar in Iraqi understanding and appreciation for Western music. She trained many young Iraqi musicians in the Baghdad Institute of Arts, and brought western music through her piano recitals to millions of Iraqis through the Iraqi television. I had the honor to watch her elegant performance and personality through television for so many years as member of the general audience, and much closely during my years working in the Iraqi television. Iraq and the Iraqi Armenian community lost a great and beautiful human being
Ala Yahya Fa'ik

We Iraqis are proud of the achievements of Beatrice. Her contribution to Iraqi culture and music is immeasurable. We just hope that the new generation of Iraqi musicians can achieve as much as Beatrice's generation. Her death is a loss to Iraq and to the world of music.
Hamid Alkifaey

I was honoured and priviliged to hear the late Beatrice Ohanessian at a private concert in Vienna, Austria, many years ago. It was the first time that I hear an Iraqi perfom classical music, and I was impressed and felt proud. My condolences to all music lovers.
Enis Al-Attar

I am deeply saddened by the news of the passing away of my dear pianist colleague Beatrice with whom I had my first public appearance as clarinet student in King Faisal II hall in Baghdad in 1947. Please dear Sita and the relatives accept my deepest condolences.
Munir AllAhwerdi


An original composition by Beatrice Ohanessian as appeared in Iraqi TV