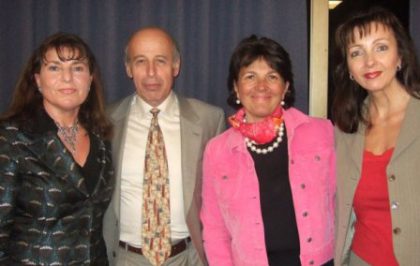 Dr. Kalayjian?s workshop was split between an introductory lecture and an experiential session in which the participants shared their own traumatic memories and helped one another to make meaning of these events.

After meeting one another over coffee and croissants, Kalayjian began her lecture with a slide show of images from New Orleans documenting the damage done? both physical and psychological ? by Hurricane Katrina and, perhaps more importantly, a failed response system on behalf of the state.? Using Katrina as a jumping-off point, Kalayjian discussed the importance not only of understanding the nature of the physical event when providing disaster relief, but the context of this event: through the politics, economics, spirituality, and culture of the psychologically paralyzed community.?

Emphasizing the importance of pre-analysis and planning, Kalayjian spoke of Armenian earthquake survivors who, she found when interviewing, were having nightmares not, as one may expect, of the earth shaking but of Turkish soldiers invading their home ? evidence of a much older trauma still vivid in the minds of the community and surfacing at a moment of utter vulnerability.?

The Group watched a short documentary during lunch which covered the MHOP?(Mental Health Outreach Program) team?s last visit to .? Helping to put things into perspective, the movie generated many questions from the participants ranging from pragmatic, logistic concerns to broader issues concerning child and group therapy and the overall reaction of the Sri Lankan community post tsunami.

Though initially quiet, the group quickly learned to feel comfortable with one another and came together after lunch to participate in the experiential session.? Mediated by Kalayjian, the participants were split into two groups; the first sharing traumatic experiences ranging from witnessing a domestic argument as a child to the impact of the second plane into the World Trade Center, and the second voicing empathetic reactions, encouragements, and most importantly validation to these confessions.? Afterwards each participant reviewed what they learned and what new dimensions of meaning they where able to discover.? The last phase of the training was a group meditation, and physical release after which the participants agreed to start an e-mail group to stay in touch with one another.?

Dr. Kalayjian closed the meeting with a one minute silence with gratitude to those victims and survivors of all the human-made and natural disasters around the world.

AASSSG delivers a symposium on Denial and Healing 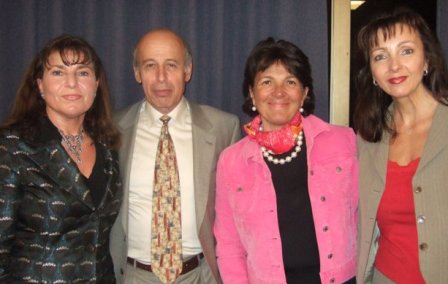 The Armenian American Society for Studies on Stress & Genocide (AASSSG) sponsored a symposium on “Denial and Healing” on Friday, April 7, which took place at , NYC. This is the Annual symposium for AASSSG commemorating the 91st Anniversary of the Ottoman Turkish Genocide of the Armenians. The event, organized and chaired by Dr. Anie Kalayjian, Professor of Psychology at and president of AASSSG, presented awards to this year?s winners of the annual Krieger Essay Contest for essay writing on the legacy of the Genocide of Armenians. Following these awards, Dr. Ervin Staub was honored with receipt of the 2006 AASSSG Outstanding Achievement Award. Dr. Staub is a Professor of Psychology at the , and founding director of the Ph.D. concentration, “Psychology of Peace and the Prevention of Violence.? After receipt of his award, Dr. Staub addressed the audience with an outstanding lecture on the trauma suffered by survivors of genocide and its consequent trans-generational effects.

The audience ? aging from teenagers to the elderly, and many of whom were either direct descendents of the Armenian survivors of the Ottoman Turkish Genocide or friends of decedents, Professor Kalayjian?s students, and faculty from Fordham ? listened attentively as Dr. Staub underscored differences between government policies, social perceptions and the personal understanding of genocide. He emphasized the destructive nature of genocide denial as he related a need for recognition of trauma, victimization, and history, including the heroic acts of Germans and Turks who attempted to save Jews and Armenians, during the respective genocides. After discussing the recognition of such a holistic history, Dr. Staub?s talk culminated by illuminating the healing effects of forgiveness and reconciliation. Clearly resonating with the audience, many members carefully contemplated, questioned, and deeply discussed the thesis.

Analysis of generational traumatic experience and healing only developed further as Drs. Sophia Kramer-Leto and Chiara Hayganush Megighian Zenati engaged the audience by conducting Family Constellations. Based on the work of Bert Hellinger (?Peace Beings in the Soul?), Family Constellations are an effective phenomenological method of revealing unconscious entanglements with the fates of family ancestors. Events such as the premature death or a murder of a family member can lead to so called entanglements, which may create imbalance in one?s future and relationships. As audience members began volunteering, Drs. Kramer Leto and Zenati instructed them to center themselves and focus deeply on their feelings. With each volunteer prompted by assigned roles and interaction with other audience members ? all assigned certain hypothetical identities ? the auditorium became a vessel of working through the past.

While some audience members adopted the role of genocide victims long perished, others were surviving children and grandchildren. In one instance, a real-life descendent of a genocide victim admitted a willingness to forgive but also felt a deep anger, which forbade that willingness. Touched on the shoulder by his murdered great-grandfather (a fellow member of the audience), he looked into the eyes of an Ottoman Turkish soldier and painfully asked, ?Why?? Another Armenian member of the audience, also in the role of genocide victim, intimated: ?I feel an urge to hug him [another participant, in the role of an Ottoman Turk]. I feel that we are one.? These were only two of the many reactions witnessed as numerous members volunteered and experienced their subconscious.

Having experienced and analyzed many deep and often personally traumatic emotions of the past, Dr. Kalayjian announced to the audience, ?And although it is important for Armenians to remember and come to terms with the Genocide, we must also remain aware of our rich culture before 1915.? With that, the audience welcomed Robert Harutunian, and others from the ?Armenian Folk Dance Society,? who brought the evocative night to a close with original ethnographic dance from pre-1915 historic . Members of the audience arose once again, but this time to learn an ancient dance and join together, creating a human serpent of movement, moving harmoniously throughout the auditorium. This event was designed to integrate theoretical components of healing post genocides, a hands-on healing practice, as well as artistic expressions promoting historic reconnection. Participants departed in the gift of the present, colored with new meaning and a renewed appreciation of the past.

BIOGRAPHY OF 3 PERSONS MENTIONED IN THE ABOVE REPORT:

Ervin Staub is Professor of Psychology at the of?, , and Founding Director of the Ph.D. concentration in the ?Psychology of peace and the prevention of violence,?? Emeritus.

He taught at Harvard and was visiting professor at Stanford, the and the London School of Political Science. His books include the two volume “Positive social behavior and morality” (1978; 1979); “The roots of evil: The origins of genocide and other group violence” (1989); and “The psychology of good and evil: Why children, adults and groups help and harm others?” (2003).

Is a facilitator of Systemic Family Therapy called ?Family Constellations?.

She grew up in and . She became a nurse and holistic health practitioner, while additionally being a performing artist. She received her training in hypnosis in the and . She is founding member of ?PPP?, , a program specifically designed to alleviate test anxiety for students.

Chiara Hayganush Megighian Zenati has a Doctoral Degree from the in Armenian Language and Literature. Her Thesis is an original research about the Armenian writer and social activist Srpuhi Dusap. She has been awarded with the Diplome de l?Academie de Saint Lazar, and has coordinated several events in the Armenian Community of Venice in collaboration with Local Institutions. She is Founding Member of the Association ?Padus-Araxes? and Member of ?AIWA? Armenian International Women Association.?

Her grandfather, Dr. Aram Megighian has left his hometown Diarbekir in 1896 at the age of 12 to go to , at the Mechitarist College Moorat-Raphael to pursue his studies. Since the day he left his hometown he has never heard from his parents. Chiara H. Megighian is a certified Family Constellation Facilitator from the Hellinger Institute of Washington, D.C. She conducts Family Constellation workshops on a regular basis and travels to translate workshops related to Family Constellation work. Thanks to this work she is now directing her energies towards reconciliation between Armenians and Turks. Chiara was born and raised in . She has lived in since 1993 where she has moved to with her husband and their three children.