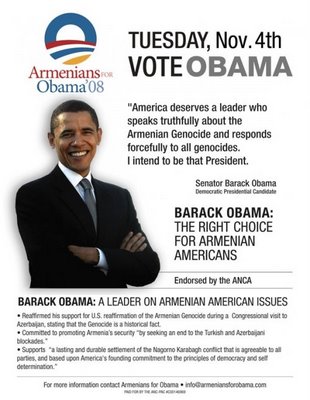 WASHINGTON (AP.) ? Barack Obama was unequivocal during the campaign: As president, he would recognize the nearly century-old massacre of Armenians in Turkey as genocide.

In breaking that promise Friday, the president did the same diplomatic tiptoeing he criticized the Bush administration for doing.

Like George W. Bush before him, Obama did not want to alienate vital ally Turkey by declaring the slaughter of an estimated 1.5 million Armenians to be genocide ? especially with Turkey and Armenia now exploring reconciliation.

Instead, he said he had not changed his view from the campaign, even as he declined to state it, and added: “My interest remains the achievement of a full, frank and just acknowledgment of the facts.”

In a statement on the anniversary of the start of the killings in 1915 ? a day when U.S. presidents typically honor the Armenian victims ? Obama said: “Each year, we pause to remember the 1.5 million Armenians who were subsequently massacred or marched to their death in the final days of the Ottoman Empire.”

The statement was less than the full and frank acknowledgment he promised Jan. 19, 2008, when he vowed that as president, “I will recognize the Armenian Genocide,” and repeatedly used the word.

An excerpt from that 2008 campaign statement, one of several he released on the subject:

“I also share with Armenian Americans ? so many of whom are descended from genocide survivors ? a principled commitment to commemorating and ending genocide. That starts with acknowledging the tragic instances of genocide in world history. As a U.S. Senator, I have stood with the Armenian American community in calling for Turkey's acknowledgment of the Armenian Genocide.

“Two years ago, I criticized the Secretary of State for the firing of U.S. Ambassador to Armenia, John Evans, after he properly used the term 'genocide' to describe Turkey's slaughter of thousands of Armenians starting in 1915. I shared with Secretary (Condoleezza) Rice my firmly held conviction that the Armenian Genocide is not an allegation, a personal opinion, or a point of view, but rather a widely documented fact supported by an overwhelming body of historical evidence. The facts are undeniable. An official policy that calls on diplomats to distort the historical facts is an untenable policy.

Scholars widely consider the events of 1915 to be the first genocide of the 20th century. Turkey contends the death toll was inflated and resulted from civil war and unrest, not genocide.

Ken Hachikian, chairman of the Armenian National Committee of America, said Obama's statement Friday “represents a retreat from his pledge and a setback to the vital change he promised to bring about in how America confronts the crime of genocide.”

Ninety four years ago, one of the great atrocities of the 20th century began. Each year, we pause to remember the 1.5 million Armenians who were subsequently massacred or marched to their death in the final days of the Ottoman Empire. The Meds Yeghern must live on in our memories, just as it lives on in the hearts of the Armenian people.

History, unresolved, can be a heavy weight. Just as the terrible events of 1915 remind us of the dark prospect of man's inhumanity to man, reckoning with the past holds out the powerful promise of reconciliation. I have consistently stated my own view of what occurred in 1915, and my view of that history has not changed. My interest remains the achievement of a full, frank and just acknowledgment of the facts.

The best way to advance that goal right now is for the Armenian and Turkish people to address the facts of the past as a part of their efforts to move forward. I strongly support efforts by the Turkish and Armenian people to work through this painful history in a way that is honest, open, and constructive. To that end, there has been courageous and important dialogue among Armenians and Turks, and within Turkey itself. I also strongly support the efforts by Turkey and Armenia to normalize their bilateral relations. Under Swiss auspices, the two governments have agreed on a framework and roadmap for normalization. I commend this progress, and urge them to fulfill its promise.

Together, Armenia and Turkey can forge a relationship that is peaceful, productive and prosperous. And together, the Armenian and Turkish people will be stronger as they acknowledge their common history and recognize their common humanity.

Nothing can bring back those who were lost in the Meds Yeghern. But the contributions that Armenians have made over the last ninety-four years stand as a testament to the talent, dynamism and resilience of the Armenian people, and as the ultimate rebuke to those who tried to destroy them. The United States of America is a far richer country because of the many Americans of Armenian descent who have contributed to our society, many of whom immigrated to this country in the aftermath of 1915. Today, I stand with them and with Armenians everywhere with a sense of friendship, solidarity, and deep respect.