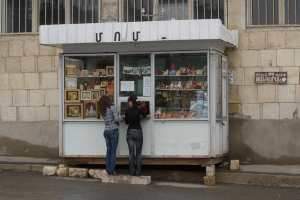 SHUSHI, Nagorno-Karabakh // With broken buildings and near-empty streets, this city of a few thousand has a desolate air, despite its spectacular mountain setting on a plateau overlooking the centre of Nagorno-Karabakh, a disputed region between Azerbaijan and Armenia.

Before the war over control of the region erupted in 1988 between Muslim ethnic Azeris and Christian ethnic Armenians, there were 25,000 people living in Shushi. At the time, Nagorno-Karabakh was an ethnic Armenian majority region within Azerbaijan. Shushi was the only large settlement in Nagorno-Karabakh with an Azeri majority. Now, the only residents of Shushi are 4,000 Armenians; all of the Azeris fled during the fighting.

But Shushi, is on the brink of the kind of renewal that has transformed Stepanakert, the enclave?s capital that lies 16km to the north. Since a ceasefire was agreed in 1994, with Armenia in de facto control, Stepanakert has turned into an attractive and leafy city with a string of new hotels, a modern assembly building and countless street cafes, even though Armenia and Azerbaijan are officially still at war over the region.

To promote Shushi?s regeneration, Nagorno-Karabakh?s unrecognised ethnic Armenian government is moving ministries to the city, and at least one new hotel is planned as more tourists arrive, mostly diasporan Armenians from countries such as France, as well as those from Armenia itself.

Also, funds from an annual telethon in November organised by the Hayastan All Armenian Fund, an international organisation set up by Armenian presidential decree in 1992, will go to Shushi. Most of those who now live there are ethnic Armenians who fled Azerbaijan as the conflict intensified.

Armen Asryan, an ethnic Armenian, left the Azerbaijani capital Baku in 1988, first going to Russia before coming to Nagorno-Karabakh, where his parents originate, in 1997.

The 40-year-old, a soft spoken cobbler, said for him the city was ?not a depressing place?.

?I have come to my own land,? he said from his ground-floor workshop beneath an apartment block.

?There wasn?t a chance to live in Stepanakert, but here the government gave us a free flat. It was ruined. There were no windows. We restored everything.”

During the war, when ethnic Armenians backed by Armenia fought Azerbaijan, Shushi was an Azeri stronghold and the source of many of the shells that landed on Stepanakert, forcing its residents to live in bunkers. Armenians took the city in an offensive in 1992 that resulted in heavy casualties on both sides.

Ashot Ghoulian, chairman of the Nagorno-Karabakh national assembly, said government ministries were currently too heavily concentrated in Stepanakert. He said ministries covering such areas as culture, youth and sport were moving to Shushi.

?Some of them will be in already existing buildings of great architectural value, maybe restored, and some buildings will be constructed for ministries,? he said.

Moving the ministries will help ?activate the life? in Shushi, Mr Ghoulian added, although given the city?s strong historical Azeri links, it may not be a popular move with Azerbaijan.

?The most important reason why we want to activate the life of Shushi is the role Shushi played in the life of Armenian Karabakh earlier,? he said.

Shushi dates from the mid-18th century and went on to develop separate quarters for its Muslim and Christian residents. Clashes between Azeris and Armenians began in the early 20th century and intensified after the First World War, when Azerbaijan claimed Nagorno-Karabakh.

After a revolt in 1920, at a time when Nagorno-Karabakh was claimed by the short-lived Azerbaijan Democratic Republic, as many as 20,000 of the city?s Armenian population were allegedly killed by authorities, an event Mr Ghoulian describes as a ?massacre?. The enclave became an autonomous region within the later Azerbaijan Soviet Socialist Republic.

?Nobody rejects that people of Azeri origin were living in Shushi [before the Nagorno-Karabakh war], but that was a result of the conflict of the past century. Today, nobody should distort that historical fact.

?Conflicts always change the demographic situation. Shushi is a city with a tragic fate. Even centuries ago the city was fought over.?

The city?s Ghazanchetsots Cathedral has been restored since the conflict ended and is now one of the few pristine-looking buildings in the city. Despite the Muslim residents of Shushi having fled, there are still several mosques, although the minaret of one of them is badly damaged.

While Shushi still appears to be a broken city, Mr Asryan said it showed signs of improvement.

?During the past five years it has developed,? he said. ?There is more transport here. Many buildings are restored now and more people live here compared to previous years.

?It was obvious it would be difficult to live here but now it?s developing.?

Photo: Buying candles in Shushi. Most of those who now live there are Armenians who fled Azerbaijan. Onnik Krikorian / The National

[Note: Originally, the reporter has used the name Shusha, the Azeri equivalent for Shushi, in his report.]