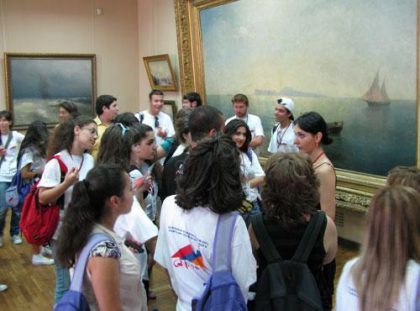 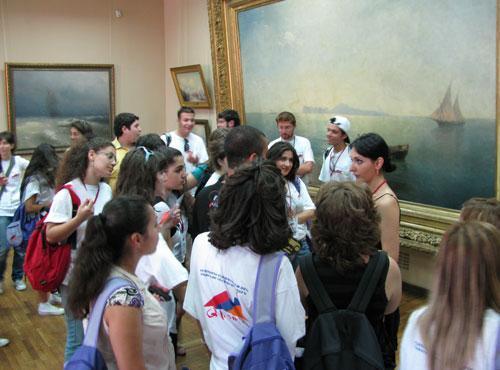 On 22 July 2009, Minister of Diaspora Hranush Hakobian met the Diasporan Armenian young persons who arrived in Armenia within the framework of the Come Home (Ari Tun) project.

The Minister began her speech with the words “Welcome to your Ministry“, then she expressed gratitude to the families that will be hosting the visitors, as well as the schools where lessons will be held.

Hakobian noted that within the framework of the program the participants will have the chance to visit places of interest in Armenia and gain friendships. “You are infected with Armenian virus on condition of never getting cured,” Hranush Hakobian noted wittingly, expressing the conviction that next year the number of participants will immensely grow.

“Being the citizens of another country, remember that Armenia is your homeland. Sarians, Aznavours, Kerkorians should be born among you,” the Minister added.

“A bridge was created which is impossible to destroy. This bridge is eternal. The Come Home program will always call the Diasporan Armenians.” Hakobian stressed. She presented “Wonders of Armenia” encyclopedia as a gift to all participants.

In the Armenian National Gallery the young people began discovering the bright colors of the Armenian Highland, painted by Martiros Sarian and other masters of the Armenian fine arts. Aram Simonian, head of Yerevan State University gave a briefing about the university and its teaching system. On the same evening they participated in the Folk Dances program at Shant TV, displaying dancing techniques they have gained during the last few days.

On 27 July 2009, as a field activity related to “Learn about our native land” interactive class, the young participants visited Khor Virap church complex and got acquainted with the history of the region. They went down the vertical stairs to the basement where Saint Gregory the Illuminator was imprisoned.

Ararat region's Deputy Governor Samvel Mirzoyan met the participants and accompanied them to the Charles Aznavour Cultural Palace in the city of Artashat, where they took part in a program called “Let's sing and dance Armenian”.

At the end of the day the participants went to Gabriel Sundukian Theatre in Yerevan, where they watched “Khatabala” play, performed by the ?Petros Adamian? Armenian theatre group from Tbilisi, Georgia.

On 30 July 2009 evening, in Sevan, President Serzh Sargsyan met the young participants on the last day of their visit. He gave a briefing about the current political situation in the region and the Turkish – Armenian relations. He noted that Armenia did the maximum, expressed good will in spite of the problems and offered to establish diplomatic relations with Turkey without any preconditions. “We negotiated for a whole year, coordinated two documents, but after that some Turkish ruling circles presented as a precondition the Nagorno Karabakh settlement and the issue of Armenian-Azeri relations,” he elaborated.

Sargsyan underlined that “our grandfathers managed to give us a small Armenia, and we must hand over our small but biblical and very beautiful country to our children.” He attached importance to the “Come Home” program, which gives an opportunity to the Diasporan Armenian young people to feel the Armenian spirit, deal with Armenian history and culture.

Sargsyan underlined that Armenia is entirely a different one with Diaspora. ?The time will come when “we will be mighty and I am sure that you will see it”, he emphasized.

Minister of Diaspora Hranush Hakobian said that more than 100 people from Turkey, Georgia, Russia, Syria, Egypt and France participated in the first round of the program. The next group will follow soon and this will continue till the end of October, hosting a total of 500 people by then.

“The program has a great moral, psychological, political and historical significance. We have set a task that our Diasporan children come, live in our families, get acquainted with the mode of life here and also gain friends … they will return to their countries with stronger Armenian spirit to continue the most important and necessary program of the preservation of Armenian nation, which is to stay loyal to the Armenian identity, community, church and state,” Hakobian said.